SAO PAULO/RIO DE JANEIRO (Reuters) – President Jair Bolsonaro on Wednesday blasted as criminals the governors and mayors of Brazil closing businesses to slow the coronavirus outbreak, but he drew a fierce backlash from across the political spectrum. 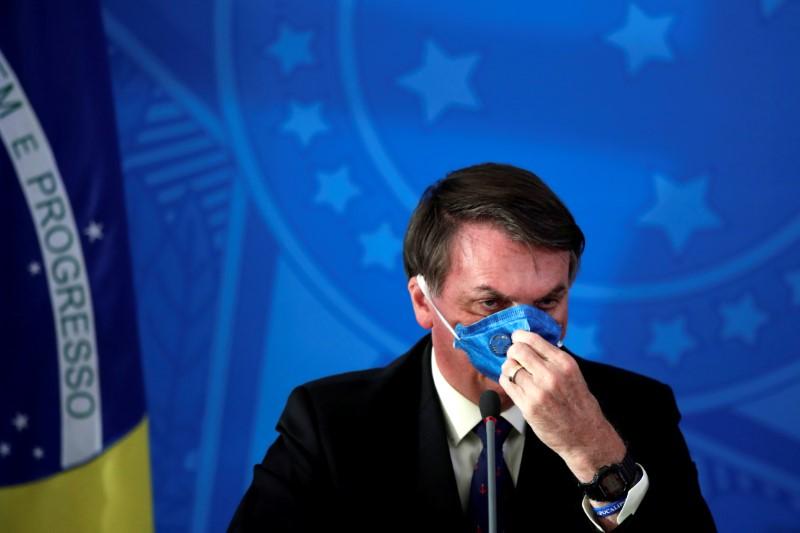 Bolsonaro cited the example of U.S. President Donald Trump in making the economic case against the shutdowns favored by public health experts, who have warned the outbreak in Brazil could trigger a collapse of the healthcare system next month.

“Other viruses have killed many more than this one and there wasn’t all this commotion,” Bolsonaro told journalists outside his official residence. “What a few mayors and governors are doing is a crime. They’re destroying Brazil.”

“If we don’t get back to work, Brazil could depart from democratic normalcy,” he added, citing recent examples of social unrest in Latin America.

In throwing his full weight against the shutdowns taking effect in Brazil’s biggest cities and states, Bolsonaro has cast himself against local officials, congressional leadership and even the advice of his own Health Ministry.

In a widely criticized national address on Tuesday, he played down the risks of coronavirus, assuring Brazilians that “90% of us will have no symptoms if contaminated.”

Senate President Davi Alcolumbre called Bolsonaro’s speech “grave,” warning it contradicted the advice of the World Health Organization and calling for “leadership that is serious, responsible and committed to the life and health of its people.”

Governor Joao Doria of Sao Paulo, Brazil’s most populous state and the epicenter of the outbreak, had a tense and confrontational call with Bolsonaro, according to people who heard the exchange.

Doria, who aligned himself with Bolsonaro in his 2018 campaign and has since become one of the president’s main rivals on the right, appeared to confirm the tone of the call.

“Instead of talking about life-saving measures, he preferred to talk about politics and elections. Lamentable and worrying,” Doria wrote on Twitter.

The Health Ministry said on Tuesday that coronavirus had claimed 46 lives in Brazil as confirmed cases jumped to 2,201, from just 291 a week before.

Despite the toll, Bolsonaro told the nation on Tuesday that most people, including himself, had nothing to fear.

“In my particular case, with my history as an athlete, if I were infected with the virus, I would have no reason to worry, I would feel nothing, or it would be at most just a little flu,” he said.