BBC Weather: UK set for ‘a lot of sunshine’

In tune with the season’s topsy-turvy weather, that toasty temperature was enjoyed in Kinlochewe in Scotland’s northwest highlands. Next warmest was Northolt in west London at 76.6F (24.8C) The previous 2021 high of 76.1F (24.5C) was at Kew Gardens, south-west London, back in March. Yesterday’s heat set a high bar for the meteorological summer starting today. But the welcome fine spell – which could see a sizzling 80.6F (27C) tomorrow – is expected to cool later this week.

However, the bookies are confident of a flaming June – cutting odds to just 7/4 on this month being a record-breaker.

Alex Apati, of Ladbrokes, said: “It looks like the British weather has finally taken a turn for the better, with a record-breaking hot June potentially on the way.”

The sun-starved masses made the most of the bank holiday and half-term break yesterday, flocking to beaches and parks, while others soaked up the rays in pub and restaurant gardens.

The beach at Southend was packed with day-trippers undeterred by traffic tailbacks. Visitors also headed to the Essex town’s hostelries, enjoying a much-needed boost since the relaxation of Covid restrictions.

There were similar scenes in Bournemouth, while Meesha-Pink Hodgson, nine, from Carlisle, enjoyed a ride on Charlie the donkey in Blackpool.

Further south, sisters Elsie, eight, and Erin, 12, celebrated school being out by making a splash at Portishead lido, near Bristol.

Nature spots also had a steady procession of visitors revelling in the sun. 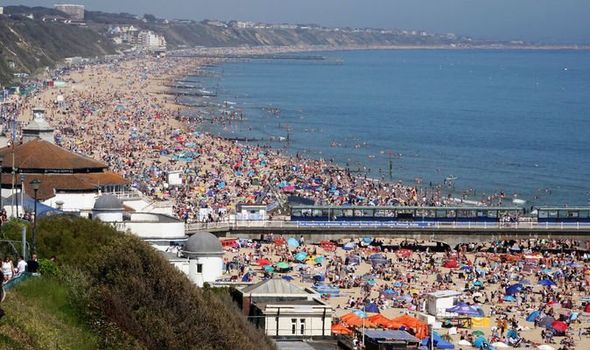 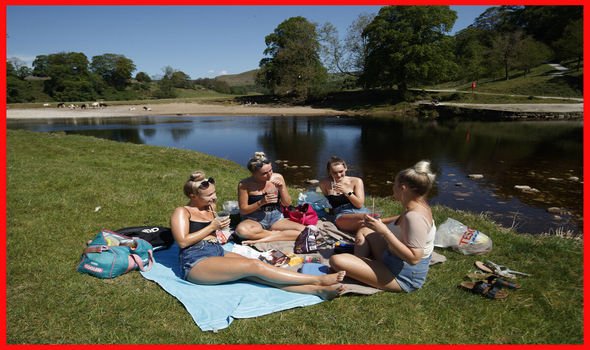 Bolton Abbey in North Yorkshire was perfect for picnickers and paddlers with its distinctive stepping stones across the river, while hundreds of families chose to cool off at Warleigh Weir, near Bath.

Meanwhile, a few daring souls posed for dramatic souvenir shots on the cliff edge at Birling Gap in East Sussex.

It was no mean feat to see the sea as millions headed for the coast. The M25 near Leatherhead, in Surrey, shuddered to halt, while the M5 near Bristol was also jammed.

The RAC predicted up to 11 million people would take to the roads seeking to enjoy the fine weather.

The cheering weather is set to continue today, with temperatures hovering around 73F (23C) in the South and 64F (18C) in the North. 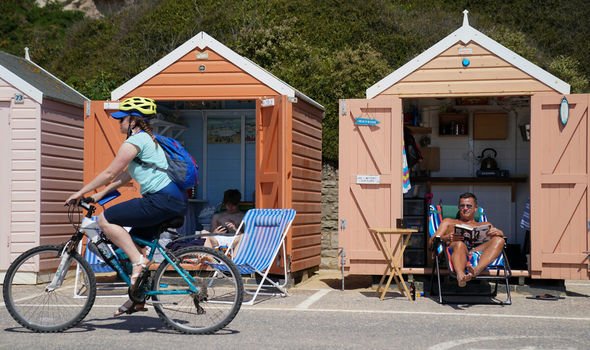 The Met Office has warned that harmful UV light levels will be very high over the coming days and advised everyone to wear plenty of sunscreen.

The baking streak peaks tomorrow with 80.6F (27C) in some parts before cooler air moves in, caused by a low-pressure weather system.

Becky Mitchell, of the Met Office, warned we are in for a dousing.

She said: “There will potentially be some thunderstorms by midweek. The first bout of showers will come into parts of the South-west and there will be a few thunderstorms in that.”

The storms are expected to hit there tomorrow, with the South-east due to receive a soaking by Friday.

Becky added: “There’s a chance of some thundery breakdown in the South-east and we could have some quite intense storms there.

“There’s still a lot of uncertainty but with the warm and humid weather we are having we have the key ingredients for thunderstorms.”

The fine and dry respite follows a rainy May – which has been declared the fourth wettest on record for the UK and the wettest in history for Wales.

Some parts of Scotland are enjoying the hot spell as much as the South of England as they benefit from the gulf stream.

The Met Office expects the first half of June to be mainly warm and sunny despite a risk of showers.

With the summer just beginning, there is still time for temperatures to soar towards the 2020 high – when 100F (37.8C) was recorded on an uncomfortable day at Heathrow on 31 July.