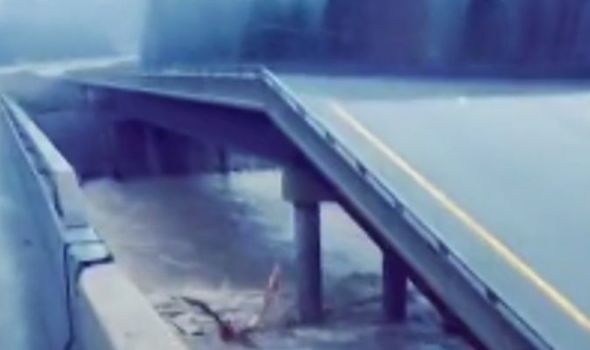 Relentless rain has continued to batter British Columbia with rainfall warnings remaining in effect across the region. Mudslides and localised flooding caused more than 100 homes in Abbotsford to be placed on evacuation alerts.

Now, the Mayor of Merritt, Linda Brown, has issued an evacuation warning for her city.

The order read: “Pursuant to Section 13 (1) of the BC Emergency Program Act, an Evacuation Order has been issued by the City of Merritt due to immediate danger to health and safety caused by a flood in the community.

“In particular, the Wastewater Treatment Plant is inundated and non-operational and will be for an indefinite period of time.”

It continued: “Continued habitation of the community without sanitary services presents risk of mass sewage back-up and personal health risk.”

The evacuation order has been issued for the entire city.

The order tells residents to “leave the city immediately” and arrange accommodation with friends and family in a different community.

The Canadian city is also arranging for buses to transport residents to Kamloops and Kelowna.

According to the order, the city has “coordinated with gas stations to ensure that they remain open” and urged residents not to “turn off your natural gas”.

An evacuation order has also been issued by the Regional District of Okanagan-Similkameen for 34 properties as the Tulameen River has started to rise.

Another warning has been issued for four properties in Electoral Area E in the Chilliwack River Valley.

Tyler Hamilton, meteorologist with The Weather Network, told CBC Monday an atmospheric river-fuelled storm from the Pacific has “really dug deep into the Fraser Valley.”

He said: “It’s no wonder we are seeing rock slides, mudslides — the small creeks and tributaries that feed into the mighty Fraser River are just simply overwhelmed.

However, she predicted to see most of the Metro region reach 200 millimetres by mid-day Monday.

She said: “This is definitely an extreme event.

“To see places receiving about that … over a two day period is definitely very significant.”

Brent Ward, a professor in the earth sciences department at Simon Fraser University, said this could be the worst flooding since 1983.

He told CBC News: “This is obviously an extreme event.

“I’ve been discussing with grad students … and we think this might be the worst series of landslides and flooding events since maybe 1983.”