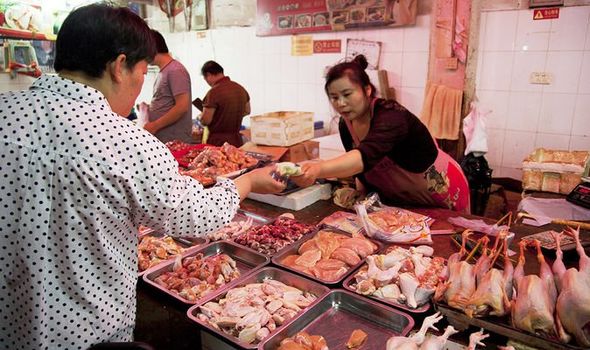 US intelligence and reports from Chinese dissidents claim authorities in Beijing have systematically played down the true level of the outbreak. CIA officials have told the White House in a leaked report that China is vastly understating both Covid-19 deaths and the number of reported cases. Sources claimed crematoria in the country have been running 24 hours a day, with 40,000 extra funeral urns taken to Wuhan.

Chinese dissident Jennifer Zeng, who has monitored the outbreak through contacts around the country, said: “Many sources told us Wuhan was preparing to build 15 more makeshift hospitals to cope with the number of victims.

“Patients were released without being properly diagnosed and tested.They wanted the city to reopen for economic activity, so they just pretended the virus was totally under control.

“But we have seen videos of bodies being moved at night, people collapsing in the street, and we’ve heard from hospitals with 100 victims in the past week.

“Based on the world average and Italy’s ratio, I believe there have been dozens of thousands of deaths at least.

“It is possible there have been hundreds of thousands of deaths.”

“They delivered 40,000 funeral urns to Wuhan, so everyone knows the government figure is a lie.”

The claims follow a decline in reported Covid-19 cases that has gathered pace since President Xi Jinping visited Wuhan on March 10.

He spoke to hospital workers by video link to signal China’s triumph over the outbreak.

Since that visit, there have been 200 more reported deaths in China, according to official statistics. The country where Covid-19 originated claims a death rate of just 2.4 people per million, compared with 90 per million in the UK and 300 per million in Spain.

The astonishing disappearance of the virus in China began weeks after reports emerged from Wuhan in February of cemeteries allegedly working 24 hours a day to burn hundreds of bodies.

Mobile crematoria were also being sent to the city, it has been claimed.

Video footage posted online on the day the Wuhan lockdown was lifted last Wednesday also shows a dead body being moved at night by health workers.

Other footage from the province appears to show migrants rioting against police, who had ordered them back to work.

Wuhan celebrated its alleged victory over the virus by setting off fireworks and urging people to go back to work, and to start shopping again to help revive the economy.

Professor Ben Cowling also said officials in China may have significantly underestimated infection rates early on by only counting people with advanced symptoms, such as pneumonia.

But Professor Cowling, codirector of the World Health Organisation’s Collaborating Centre for Infectious Disease Epidemiology at the University of Hong Kong, also stressed: “The cohort of people leaving Wuhan are perhaps going to be the most tested people in the world.

“Wherever they go, they are probably going to be monitored and surveilled.”