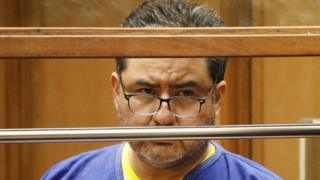 Sex crime charges against the leader of an international religious organisation must be dismissed over procedural errors, a US appeals court has ruled.

Mr García was arrested in California last year and denies the allegations.

The judges ruled the case should be dropped over a delay in granting him a hearing after new charges were added.

The appeals court determined on Tuesday that Mr García should have been given a hearing within 10 days of the new charges, including child pornography, being filed, AFP reported, but there were delays in the case.

This ruling is not considered final for another 30 days, and prosecutors are reviewing the decision.

The Mexico-based La Luz del Mundo church responded, saying in a statement that it was a decision in favour of justice as “the case should never have been brought”.

A fundamentalist Christian organisation, La Luz del Mundo was founded in 1926 by Mr García’s grandfather, Eusebio Joaquín González. Mr García is known as “the Apostle” to his followers.

La Luz del Mundo says it has over five million followers globally, and over a million in Mexico.

The church’s influence has spread in recent years to parts of California that have large Hispanic populations.

Mr García, a Mexican national, and three female co-defendants also affiliated with the church, are accused of committing 26 felonies in southern California between 2015 and 2018.

These included human trafficking, production of child sex abuse images, and forcible rape of a minor.

Court documents alleged Mr García lectured several underage victims about “a king having mistresses and stated that an apostle of god can never be judged for his actions”.

His co-defendants have been named as Alondra Ocampo, Azalea Rangel Meléndez and Susana Medina Oaxaca. Ms Meléndez remains at large, while Ms Ocampo and Ms Oaxaca are in custody in Los Angeles.