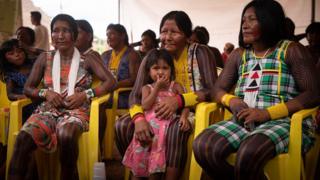 Indigenous communities in the Amazon region and elsewhere in Brazil are in danger of being “wiped out” by the coronavirus, according to health experts.

Respiratory illnesses – such as those that develop from the influenza virus – are already the main cause of death for native communities.

Infections were initially concentrated in the industrialized state of São Paulo. However, they have now spread across the country, including to indigenous territories in the Amazon basin that are the size of France and Spain combined.

The first case among indigenous peoples was recorded in Amazonas state.

“There is an incredible risk of the virus spreading across the native communities and wiping them out,” says Dr Sofia Mendonça, a researcher at the Federal University of São Paulo (Unifesp).

Dr Mendonça is the co-ordinator of a university-led health project among indigenous peoples in the Xingu river basin in the Amazon rainforest.

She fears the coronavirus could have a similar impact to previous major outbreaks of highly contagious respiratory diseases such as measles.

In the 1960s, a measles outbreak among members of the Yanomami community living near the border with Venezuela killed 9% of those infected.

“Everyone gets sick, and you lose all the old people, their wisdom and social organization,” Dr Mendonça says. “It’s chaos.”

In response to the Covid-19 pandemic, she adds, some communities are planning to split into smaller groups and seek refuge inside the forest. That is how they avoided extinction during past epidemics.

“They will gather materials needed for hunting and fishing and will set up camps, waiting there until the dust settles,” she says.

Many communities lack the means to reduce the risk of contagion, such as washing hands with soap and water, or using hand sanitizer.

People also often live in close quarters with each other and share bowls and glasses, both of which help infectious diseases spread more quickly.

They are now being advised to stop sharing utensils and to use traditional seclusion practices – such as those applied to women after they give birth – to isolate people with the symptoms of Covid-19.

Taking measures into their own hands

But as the virus spreads across Brazil, many are questioning whether the government will seek to protect indigenous groups, which make up 0.5% of the population.

President Jair Bolsonaro is seen by many indigenous leaders as an enemy of their cause. He has said Brazil’s indigenous lands are too big and that their natural resources should be shared with the rest of the population.

While many governors and mayors have ordered restrictions to reduce infections, the president has compared the coronavirus to a “a little flu” and advocated reopening schools and shopping centres.

In the face of government inaction, several indigenous organisations have asked their communities to suspend trips to cities and prevent visitors from entering their territory.

“Whoever is a true friend understands our fragility. Let’s keep the coronavirus away from the villages,” said a banner posted on a road in Mato Grosso state by members of the Karajá indigenous people.

Even with such precautions, experts say it is likely Covid-19 will eventually reach some villages and that it will be necessary to isolate the sick before they infect people in contact with them.

Experts also warn about the grave threat the coronavirus poses to indigenous groups who already live in voluntary isolation.

According to the federal agency for indigenous affairs, Funai, there are 107 known indigenous groups in Brazil’s Amazon that have no contact with the outside world.

However, illegal loggers, hunters and evangelical missionaries are operating in their territories. And indigenous organisations and NGOs say there has been a sharp increase in incursions in recent years.

Funai has also had its budget slashed by consecutive administrations, making it harder for the agency to protect remote communities.

There are now fears that the battle against the coronavirus will further reduce its resources to protect the forest and those living in it.

While most indigenous groups agree they should avoid visiting cities to reduce the risk of infection, many leaders say people could go hungry if they have no access to markets.

In São Gabriel da Cachoeira, an Amazonian municipality that borders Colombia and Venezuela, thousands of members of local groups travel on boats to the city each month to receive pensions and access government cash-transfer programmes.

The expansion of such programmes in recent decades means some communities have stopped hunting for and growing their own food, and now rely on them to survive.

Marivelton Baré, president of the Federation of Indigenous Organizations of Rio Negro (Foirn), says many local communities are “in a panic”.

“We’ll need to take the food to the villages so that they don’t expose themselves during this critical moment,” he says.

There are no ventilators in São Gabriel da Cachoeira’s hospital, so a seriously ill patient would need to be sent to the capital of Amazonas, Manaus – a 1,000km-long (620-mile) boat journey away.

Speaking on condition of anonymity, a nurse working for the Special Secretariat for Indigenous Health (Sesai) says its staff have no testing kits to detect Covid-19, and that there are not enough protective masks and other equipment to deal with cases in indigenous villages.

Sesai itself told the BBC it had provided “a series of technical documents, so that indigenous peoples, managers and employees could be guided to adopt measures to prevent coronavirus infection”.

The agency added that all its health teams had received training on how to treat patients.

But it did not comment on the fears of food shortages in villages.

Funai, the federal agency for indigenous affairs, did not say how it would tackle hunger and land invasions during the pandemic.

Mr Baré says the government has not offered any help and that people will start to ignore the advice to stay in their villages if their food stocks run out.

“If the choice is either being infected or going hungry, most will choose the first,” he warns. “Then the consequences will be dire.”