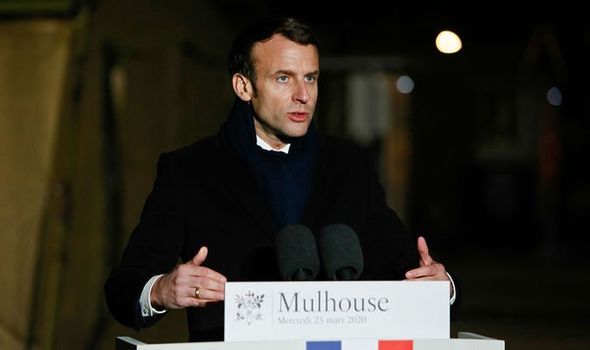 The poll, conducted by Ifop for Le Journal du Dimanche (JDD), showed that 56 percent of French people do not trust the government to “effectively address” the worsening health crisis. Just 44 percent said that they approved of the government’s crisis response plan, down 11 points in one week.

Paradoxically, a separate poll by Ifop also commissioned by the JDD found that President Emmanuel Macron’s popularity rating had hit a two-year high, showing that his handling of the crisis was being given a big vote of confidence.

Some 43 percent of the French are “satisfied” with M Macron, according to the Ifop poll, an 11-point increase compared to the previous month and the highest since April 2018.

The polls were published shortly before France’s health chief Jérôme Salomon said that 40,174 people had tested positive for coronavirus in France, up from 37,575 a day earlier.

Among the nearly 19,000 patients now in hospital, 4,632 are in intensive care, M Salomon told a daily press briefing.

Health authorities reported 292 new deaths on Sunday, he added, up 13 percent on the previous day and taking the total number of fatalities to 2,606.

The polls were taken after the Macron government imposed drastic restrictions on movement on March 17 to slow the spread of the disease, with people ordered to stay home other than to buy food, exercise alone, carry out essential work or seek medical care.

Prime Minister Édouard Philippe said on Friday that the “battle” against the virus was just beginning.

“The first two weeks of April will be even tougher than the past fortnight,” he told reporters, before admitting that the unprecedented restrictions on public life would remain in place until at least April 15.

France’s Health Minister Olivier Véran, for his part, announced on Saturday that the government had ordered more than a billion face masks as it scrambles to keep up with demand.

Doctors, nursing home staff, police and other frontline workers are furious at the shortage of vital masks and other protective gear.

A plane arrived in Paris from China on Sunday carrying 5.5 million masks and other equipment, though health officials say the country needs 40 million masks each week for health workers alone as the outbreak rages on.

“Our first Boeing 777 Cargo has just landed at #ParisCDG with close to 100 tonnes of medical equipment on board, including more than 5 million masks,” Air France tweeted.

Up to one-third of the world’s population is currently under lockdown as the virus forces countries to hit pause in a bid to slow its spread.

The coronavirus crisis has upturned nearly every aspect of society: wiping out millions of jobs, straining health care services and prompting scores of governments to dig deep into their pockets.

Worldwide coronavirus fatalities passed 33,000 on Monday as infections jumped to more than 700,000. European nations have been hit harder on a per capita basis, with 20,059 deaths.