Violence broke out in Rome as anti-lockdown protesters threw flares and flash grenades at police, who fought back with tear gas and water cannons.

Supporters of the far-right party Forza Nuova (New Force) were largely among the crowd of a few hundred in Piazza del Popolo, one of Rome’s famous landmarks.

They were protesting against new COVID-19 restrictions, including a 6pm curfew for bars and restaurants and the closure of public gyms, cinemas and swimming pools. Italian Prime Minister Giuseppe Conte announced the measures on Sunday to try to slow a second wave of infections.

Scuffles broke out when the protesters, who were shouting “freedom, freedom,” lit coloured flares and threw bottles and paper bombs as they confronted police.

In response, police in riot gear moved in quickly to force protesters into the streets and the two sides battled for about 10 minutes before officers used tear gas to disperse the crowd.

It was the second night of violent unrest in Rome over COVID-19 measures.

The dramatic scenes had also been repeated over several nights in other parts of Italy, including in Turin and Milan, where protesters threw stones, fireworks and bottles.

But, while many of the demonstrators were extreme far-right supporters, large parts of the population were also against the government’s new rules – including business owners afraid they will not survive. 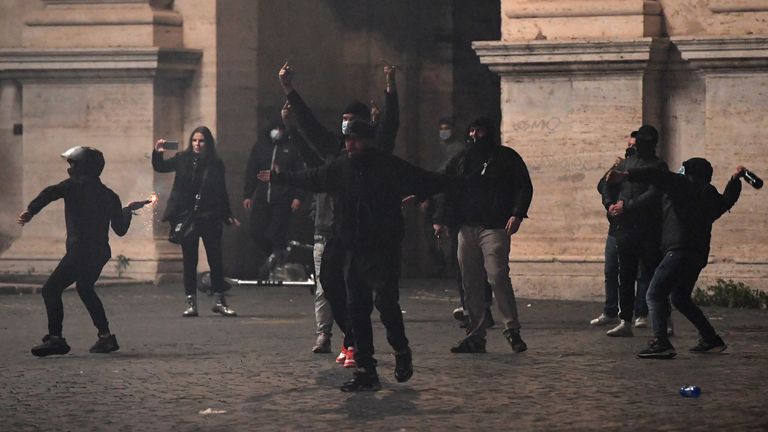 Mr Conte earlier stressed he made the right move as the health ministry reported a record 21,994 new cases on Tuesday and 221 deaths – the highest number in five months.

He also announced a €5bn (£4.5bn) package of support for businesses hit by the new restrictions, in an effort to balance the health impact of coronavirus with its devastating effect on the economy.

In declaring the restrictions, Mr Conte said they were aimed at preventing a sweeping, strict nationwide lockdown. “We can’t delude ourselves that with an epidemiological curve in continuous rise, people can safely go around, in gyms, in restaurants, without fear,” he said.

“If we follow these rules, we will have a chance to arrive in December with some serenity, without a national health service overstressed and exhausted.

”Otherwise, we would have to have a general lockdown, a scenario we want to avoid in any way possible and that we can’t afford.

“These measures are therefore necessary to protect our economic, productive and social system and to avoid to damage it beyond repair.”