Coronavirus: India charity making 70,000 meals a day for the poor

Khaana Chahiye is a citizens’ initiative to ensure much of Mumbai’s workforce does not go hungry during lockdown. 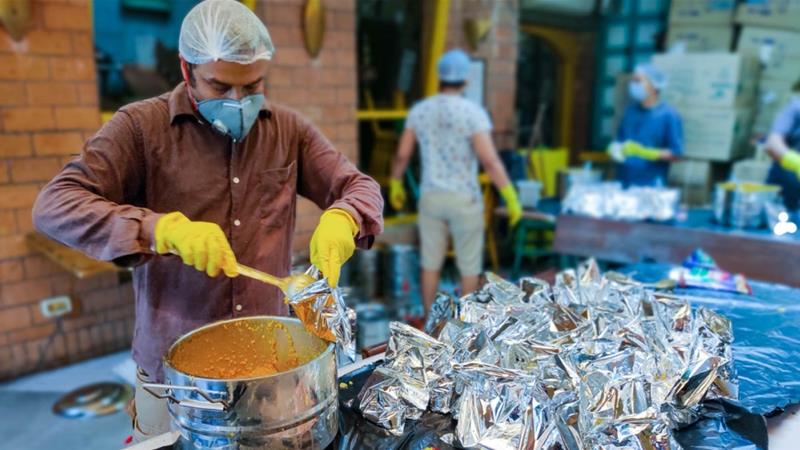 Mumbai, India – The streets of Mumbai, India’s financial capital, are forlorn and neighbourhoods eerily quiet, with the rustle of leaves caused by the warm breeze being the only audible sound in the vicinity.

But a suburban restaurant is bustling with activity as 8 to 10 men briskly portion out khichdi (boiled rice with lentils) from large pots into smaller containers. Intent on their work, they keep their eyes on the vessels as their hands move the hot meals along.

Their mandate is to pack 5,000 meals to be distributed to the homeless, slum dwellers and migrant workers across the city.

The restaurant is one of the six centres set up by KhaanaChahiye.com, an initiative now clocking 70,000 meals a day, ensuring that most of Mumbai’s workforce does not go to bed hungry.

The organisers behind Khaana Chahiye (Hindi for “need food”) say this is an attempt to prepare a hunger map of the sprawling metropolis.

Their website serves as a platform to collect donations and receive alerts on people facing hunger.

India was put under a nationwide lockdown on March 25 to check the spread of coronavirus pandemic. The initial three-week lockdown has been extended to May 3.

With more than a quarter of India’s 1.3 billion people living below the poverty line, the world’s largest lockdown has unleashed unprecedented misery upon the country’s migrant workers and the poor.

While both the federal and state governments have scrambled to provide relief, it has fallen upon the good samaritans in India’s cities and villages to fill the vacuum.

Shishir Joshi, founder of a non-profit organisation called Project Mumbai, is the driving force behind KhaanaChahiye.com.

“The reports of people sleeping hungry had been coming out,” he told Al Jazeera. “The idea emerged out of a conversation with a friend. I then roped in two more people.”

One of them was Ruben Mascarenhas, a local politician.

“I had been getting several calls from different parts of city regarding the workforce basically starving due to the shutdown,” Mascarenhas told Al Jazeera. “We got together, and on March 29, started with 1,200 meals.”

The 1,200 meals were distributed in no time at all along a highway, he said. The volunteers said fights broke out between people hoping for food on the first day of distribution. The organisers realised they needed to scale up.

“We started crowdfunding and appealed for more volunteers,” said Joshi. “A few restauranteurs opened up their kitchens and offered to make meals for us at a cost.” 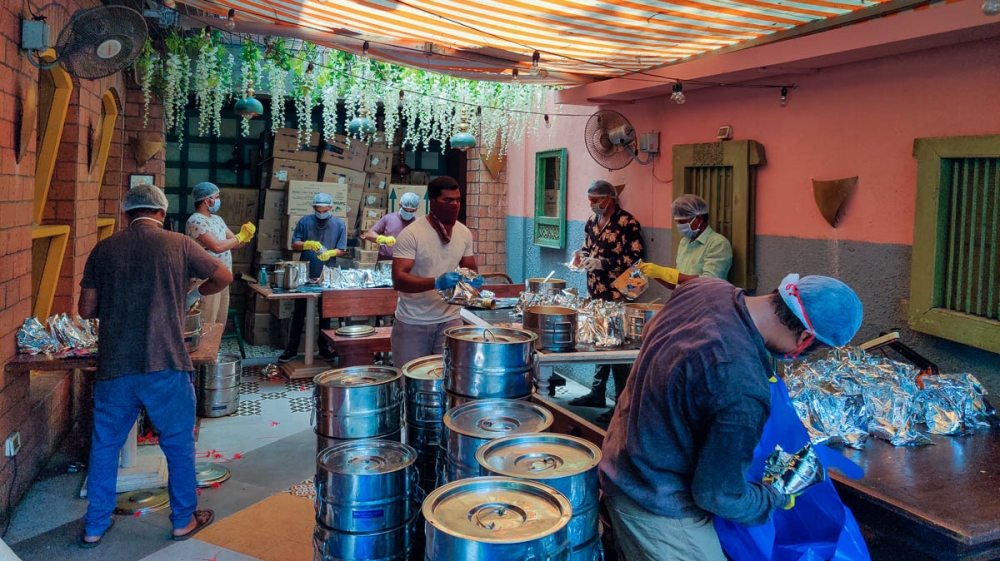 Neeti Goel has five of her restaurants preparing meals for the KhaanaChahiye.com initiative.

“I read an article in one of the papers that said the children of workers are eating mud,” she told Al Jazeera.

“It horrified me. This is a genuine initiative where people from different backgrounds have come together out of empathy.”

Things continued to fall in place as more volunteers signed up. Three weeks later, the group said it is now delivering 70,000 meals across Mumbai.

“I have been getting calls from officials in different states to look after their workers stuck in Mumbai,” said Joshi.

Every day at 11:30am (06:00 GMT), six trucks and a few private vehicles leave from six different locations and crisscross the deserted highways of the city.

On Saturday, when one of their vehicles pulled over at a slum in eastern Mumbai, about 1,000 people had already queued up near a stand of dust-covered autorickshaws. 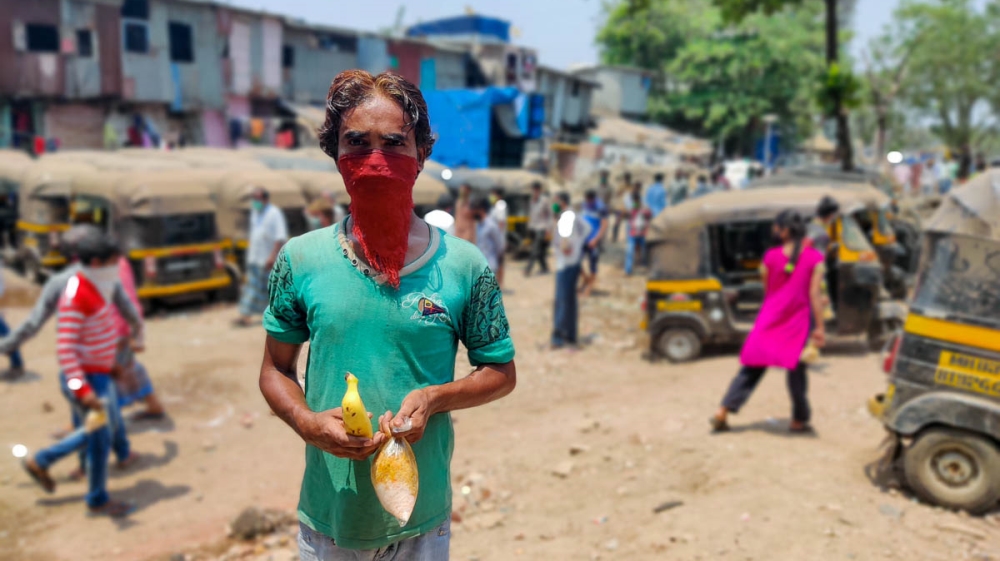 “We coordinate with local NGOs who help us locate people in utmost need,” said Mascarenhas.

Those standing in the queue which stretched nearly a mile were predominantly shoemakers who had worked at shoe factories, now shut due to the lockdown, for $2 a day.

“I would drink water in the initial days of the lockdown when I felt hungry,” said Indrajeet, whose family lives in a north Indian village. “For the past few days, I have at least managed to get one meal a day.”

He said the shoe factory owners switched off their phones once the lockdown began, leaving the workers to fend for themselves.

“Once the trains restart, I will leave and not come back to Mumbai again,” said Indrajeet, 30, as he walked back to his room in the blistering heat.

‘A matter of shame’

More cheerful than Indrajeet was eight-year-old Sama. A blue handkerchief wrapped around her face, she collected her meal and jumped in the air.

“I got rice,” she said, holding up the packet, and ran away.

The stark reality of the workers dawned upon some volunteers. “You realise how lucky you are,” Pathik Muni, a computer professional, told Al Jazeera. 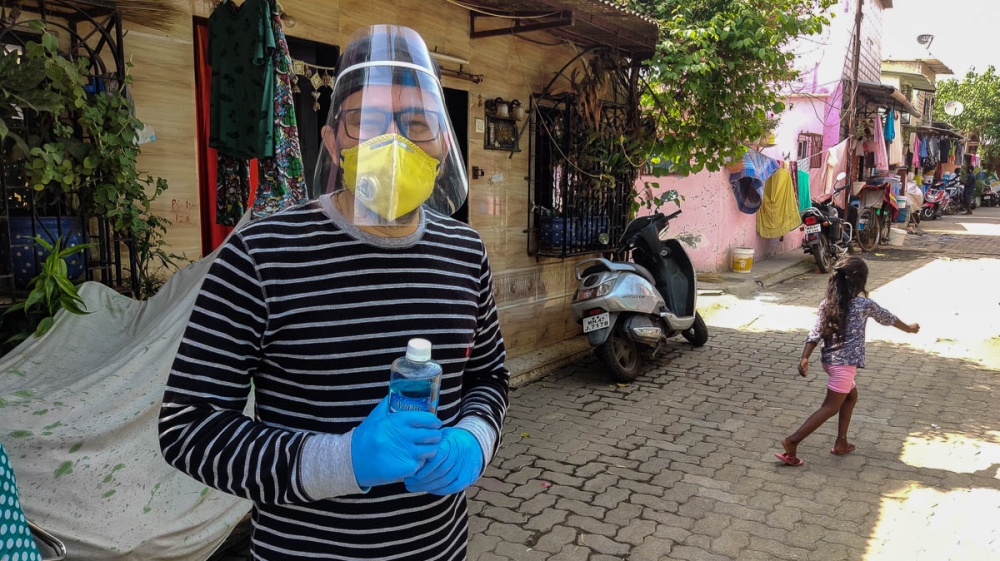 The volunteers’ next stop is at a village in Goregaon, another suburb of Mumbai.

Children, women and men of all ages are waiting there for food as local coordinators shout at them for forgetting the concept of physical distancing.

The men are mostly daily wage labourers. The women work as domestic help in nearby highrises and said their employers had sent most of them on unpaid leave.

Muni wondered whether the crisis would have been less challenging if every privileged household had taken responsibility for their domestic workers.

“It would have allowed us to focus on migrant workers and the homeless,” he said. “If you have abandoned your domestic help that has been taking care of your home for years, that is a matter of shame.”

By three in the afternoon, the day concludes.

Drenched in sweat, the volunteers buy bottles of chilled water from a nearby grocery store. It would be evening before they get back to their homes.

Tomorrow is another long day in the field. They say they have been asked if Khaana Chahiye can add another 5,000 meals a day. 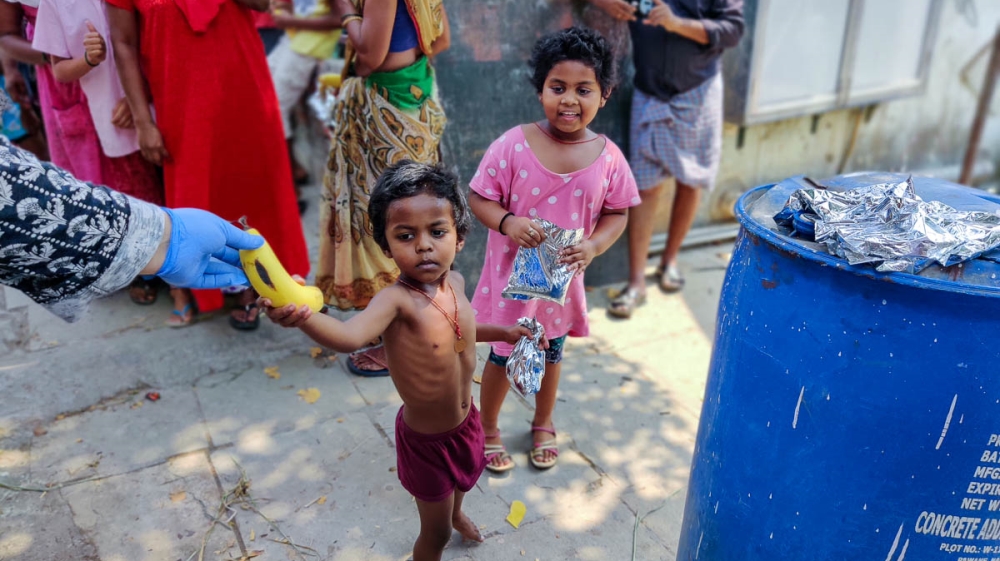