Ireland has taken its first steps out of lockdown with people allowed to meet in groups of four from today.

Phase one of the country’s roadmap out of the coronavirus lockdown got under way on Monday, with those whose jobs are outdoors including construction workers and gardeners allowed to go back to work.

People are now allowed to meet others from outside their household, but only in groups of four. They must meet outside and social distancing measures must still be observed. 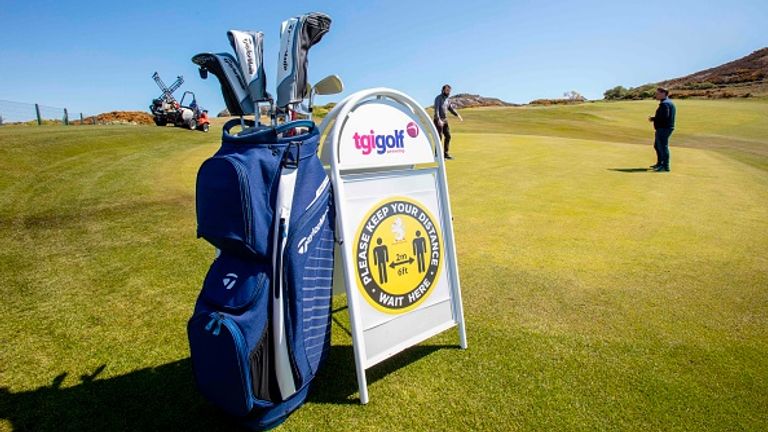 Some retail outlets are reopening, and outdoor sports like golf and tennis can be played again, with people also permitted to tend to their allotments.

Garden centres, motor and bike repair shops, opticians, hardware shops and farmers’ markets are among the businesses reopening, but libraries and other non-essential shops will remain closed until phase two starts on 8 June.

As the first major restrictions lift, people have been urged to wear face coverings on public transport or in enclosed indoor areas such as small shops where social distancing is not possible.

Irish Health Minister Simon Harris warned the country is at a “crucial moment” in its COVID-19 journey and that it is still “in the danger zone”.

He urged people to be cautious and not put Ireland in a “bad place”, adding: “We have all come too far and sacrificed too much to screw it up.”

Sky News’s Ireland correspondent Stephen Murphy said: “An unusual sight greeted me as I drove to work this morning in Dublin – men in high-vis jackets stopping my car to let a JCB enter a dusty construction site. I hadn’t seen builders at work for nearly two months.

“In Dublin’s Herbert Park, a man dressed in tennis gear and clutching a Head racket made his way eagerly to the council tennis courts.

“Elsewhere in the park, a few small groups took advantage of the new groups of four rule, embarking on a drizzly morning stroll clutching takeaway coffees – most abiding by the two-metre rule painted on the tarmac paths.

“These may not seem like big things, but they are the first tentative steps on the restoration of normalisation for Irish society.”

There were 54 COVID-19 patients in intensive care on Sunday, down by 67% from the peak in mid-April when around 160 people were in ICU.

The first phase also includes the reopening of schools and college buildings for teachers so they can prepare for a phased return of primary and secondary pupils as part of the fifth stage from 10 August.

Test and tracing measures have been put in place to help with easing restrictions, with Ireland now able to test 100,000 people a week.