Data has revealed the borough of Blackburn with Darwen, in Lancashire in the north-west, now has a rate of 78.6 cases per 100,000 in the seven days up to July 17. By comparison, Leicester, which was the first town in the UK to be subject to a local lockdown — had 72.6 cases per 100,000 people during the same period. Last week public health officials in Blackburn brought in measures aimed at enforcing social distancing in the wake of concerns about rising infection rates.

Up to 250 mourners at a mosque in the town were last week forced to self-isolate after the imam was confirmed to have COVID-019.

The Jamia Ghosia mosque has now been closed for a deep clean, with all who attended the funeral on July 13 required to quarantine themselves or take coronavirus tests.

Meanwhile Boris Johnson will meet his Cabinet in person for the first time in four months today as the Government presses ahead with plans to secure millions of doses of a potential vaccine.

Ministers will meet in the Foreign and Commonwealth Office rather than the smaller Cabinet room in Downing Street to allow for proper social distancing.

Yesterday a study suggested a COVID-19 vaccine being developed by the University of Oxford was safe and induces an immune reaction, with the scientific community describing the news as “encouraging”.

SCROLL DOWN FOR REGULAR UPDATES 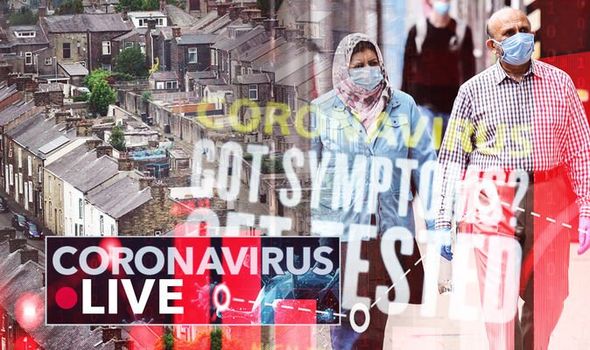 7.56am update: Kate Garraway’s husband in dramatic reaction after nurses turn on GMB to hear wife

Kate’s husband Derek has been in hospital for almost three months now after contracting coronavirus earlier this year.

The GMB presenter’s spouse was left in a coma as a result of the virus but Kate shared positive news last week when she revealed he’d opened his eyes after almost 10 weeks in the induced state. Today, she shared another update on his wellbeing, speaking to Ben Shephard on the ITV show, revealing he’d even tuned into watch the pair on TV. 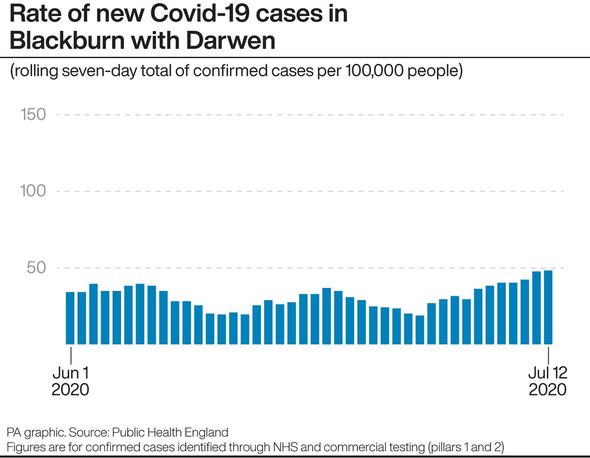 Health Secretary Matt Hancock, one of the ministers expected to attend Tuesday’s Cabinet meeting, has claimed the coronavirus was “on the back foot” as he praised the work of British health officials, saying they had “played a blinder”.

Mr Hancock will face questions about possible vaccine treatments and the latest NHS Test and Trace results when he appears before the Commons Science and Technology Committee today.

Meanwhile, former Tory leader William Hague has said the Government must recognise there has been a “gap” in its pandemic response.

Writing in The Daily Telegraph, he said: “Mass testing, using tests still being developed but which could give results at the point of use, might be the only way to spot new outbreaks quickly enough and give people the confidence to go back to the office, the airport and big indoor events.”

7.40am update: Cabinet poised to meet in person

Boris Johnson will gather his Cabinet in person for the first time in four months on Tuesday as the Government presses ahead with plans to secure millions of doses of a potential Covid-19 vaccine.

Ministers will meet in the Foreign and Commonwealth Office rather than the smaller Cabinet room in Downing Street to allow for proper social distancing.

It comes after a study suggested a COVID-19 vaccine being developed by the University of Oxford was safe and induces an immune reaction, which was branded “encouraging” by the scientific community.

Deputy Chief Medical Officer Professor Jonathan Van-Tam responded in The Sun, saying he was “cautiously optimistic that by late next spring there will be several vaccines that will have made it. And my confidence is increasing”.