India has began its ambitious project of vaccinating its 1.3 billion citizens – as it aims to administer 300 million jabs by August.

Prime Minister Narendra Modi launched the voluntary vaccination programme at 3,006 locations across the country this morning.

About 300,000 health workers will be vaccinated today and the numbers will increase as more capacity is enhanced every week.

In the first phase, vaccines will be given to 30 million health and frontline workers for free.

In its second phase 270 million citizens over the age of 50 and those under 50 with other health problems will be vaccinated.

There is an air of relief and optimism at the Rajiv Gandhi Super Speciality hospital as the first beneficiaries line up for the jab.

There is also relief and celebration by health workers at the Lok Nayak Jai Prakash (LNJP) Hospital in Delhi. 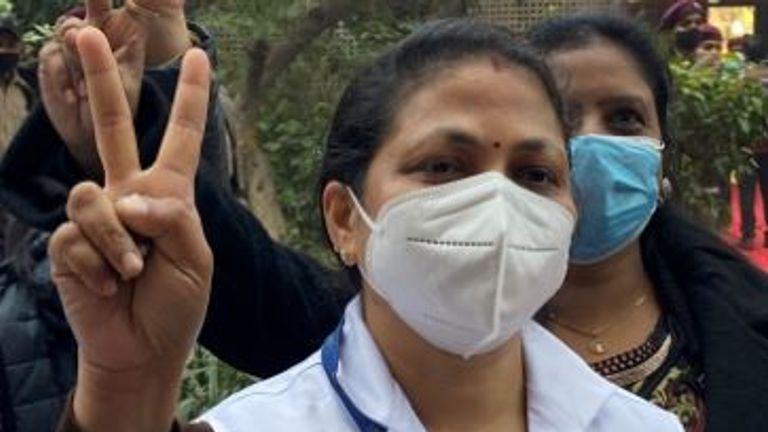 Staff nurse Biji Tony, the first to be vaccinated there, told Sky News: “I am so relieved. It has been a very difficult year, working day and night.

“We’ve stayed away from family and loved ones. We are human as well. Now all this ends. We are not afraid anymore after we get the second dose.”

Dr Suresh Kumar, the medical superintendent at the LNJP hospital, told Sky News: “Today is a historic day and like a festival, we are feeling as if we have won a super world cup.

“But it has come with a lot of struggle. We have lost doctors and staff to the virus. But now we are ready to win the COVID war.”

The two vaccines, the Oxford-AstraZeneca’s “Covishield” and Bharat Biotech’s “Covaxin”, were approved for emergency use by the Central Drugs and Standards Committee (CDSCO) on 3 January.

Millions of doses of Covishield, manufactured by the Serum Institute of India at its Pune plant, and Covaxin, produced by Bharat Biotech in Hyderabad, were transported under security to various cities across the nation.

The approval of the latter has raised concerns amongst scientists and epidemiologists as third phase trails are still ongoing and its efficacy has not yet been published.

Prime minister Modi said: “The DCGI (Drug Controller General of India) gave approval after they were satisfied with the data of the two vaccines. So stay away from rumours.”

Professor KS Reddy, president of the Public Health Foundation Of India (PHFI) – a non- profit organisation and a watchdog of public health – said: “Ideally at the best of circumstances one should see the phase three trials completed and efficacy data fully evaluated and out in the public domain through scientific publications as well as other scrutiny.

“However in this pandemic situation it was felt that given the large number of persons in India that need to be immunised the potential escalation of the epidemic due to mutants. I think the policy makers have taken the decision, I too wish the trial could have been completed earlier.

“But as far as the safety is concerned it has been adequately proven for Covaxin. But anyone who has doubts of the vaccine need not take it even if it is offered, they can decline it.” 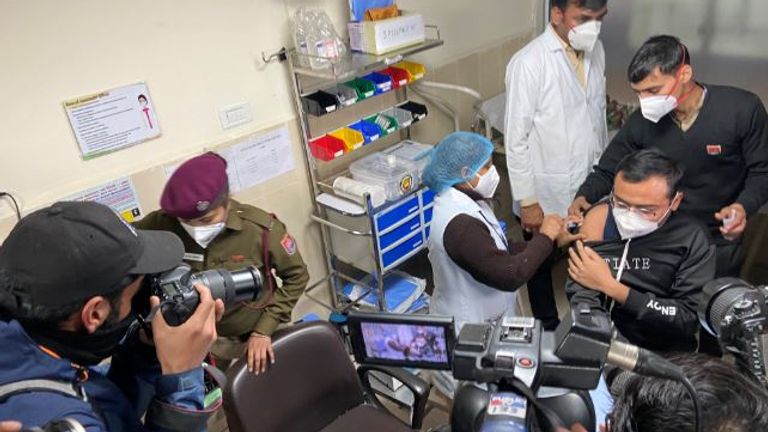 Indian Health Ministry spokesperson Rajesh Bhushan said: “There is no option for recipients to choose which vaccine they want to be inoculated with.”

Preparations for these dry runs took place in more than 700 districts across the country with mock transportation and dummy injections by more than 150,000 health staff.

Immunising a country that is almost 2,000 miles north to south and the same east to west with over a billion people will be a herculean task.

Reaching remote and rural areas where most of India lives and where the infrastructure is wanting will be a challenge.

Added to this is a second jab required to complete the cycle.

And then there are the many summer months where temperatures soar to 40C (104 F) or more in most parts of the country.

It has been a tragic winter for the Sharma household

Deviram Sharma, 65, died within four days of being admitted to a hospital with the virus.

His son Avneesh is donning a PPE suit to perform the last rites at Nigambodh Ghat – the largest Hindu crematorium.

Families have no time for mourning as farewells are hurried and from afar due to restrictions.

Traditional last rites are rushed under the overbearing shadow of the virus, the bereavement a mere formality.

Avneesh told Sky News: “It has jolted our family, it has shaken our roots, even I had to go on medication and am still feeling low myself.

“I hope and pray that this virus is removed through the use of vaccination and others don’t have to suffer what our family has gone through.”

With more than 10.5 million cases, India is the second worst affected country after the United States.

Almost 152,000 deaths have been reported so far and the need for a vaccine has never been as critical as now.