The former head of world cycling’s governing body says the sport has to take a “hard look” at itself after a horror crash during the Tour of Poland left Dutch cyclist Fabio Jakobsen fighting for his life.

Brian Cookson, former president of the UCI, said cycling must abolish downhill finishes like the one in the first stage of the Tour of Poland, which resulted in the crash between Jakobsen and compatriot Dylan Groenewegen.

Jakobsen required resuscitation for an hour and had surgery on his head and face for five hours following the crash in the city of Katowice in southern Poland. The 23-year-old remains in a coma and the incident has prompted calls for further safety measures to be introduced to protect riders.

“Everyone concerned has got to take a hard look at themselves,” Mr Cookson told Sky News.

“From the UCI, to the riders, to the race organisers. I’m as terrified as anyone else watching that crash, it was really horrendous.”

As both riders were approaching the finish line, Groenewegen veered suddenly to the right, squeezing his rival against the security barrier. The barrier gave way and Jakobsen somersaulted through the air as Groenewegen skidded along the tarmac.

“It was clearly a very dangerous manoeuvre by Groenwegen and then obviously something has gone amiss with the barriers,” said Mr Cookson.

“We need to find out what went wrong with the barriers and also not have those downhill finishes anymore and the riders have to take care of each other a bit more.

“Circumstances change and technology has made bikes a lot faster,” Mr Cookson added. 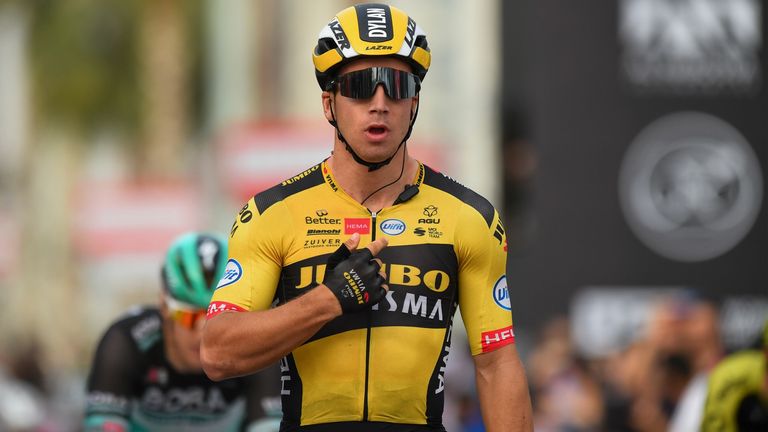 “I think in the past commissaires [cycling officials] have tolerated certain behaviour from sprinters, because they’re seen as the macho guys of the sport, but nobody’s that tough that they want to be sent into barriers at 40mph.”

Jakobsen, who remains stable in hospital, hit an official in the crash. The official suffered head and spinal injuries but was speaking as he travelled to hospital in an ambulance.

“Fabio Jakobsen’s situation is serious but at the moment he is stable,” a team statement read.

“Because of the gravity of his multiple injuries, he is still kept in a comatose condition and has to remain closely monitored in the following days.”

Groenewegen, who was named as the stage winner before being disqualified, and several other riders also fell after crossing the line.

“The nature of road racing is that there will be hazards from time to time,” said Mr Cookson.

“That comes with hurtling downhill at 50mph to 60mph, it’s inherently dangerous. We have to do what we can to minimise those risks but it’s not like Formula One, you can’t put a protective shell around a rider.”