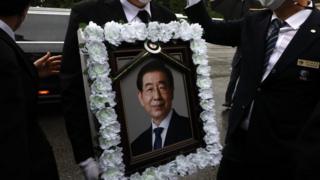 A former secretary for the mayor of Seoul – who died last week in an apparent suicide – has accused him of four years of sexual harassment.

Park Won-soon was one of South Korea’s most influential leaders and was seen as a possible presidential candidate.

His body was found in woods on Friday – after a note to his family was found – and his funeral began on Monday.

His death came just a day after the secretary made a police complaint about his behaviour.

More than 500,000 people signed a petition saying Mr Park’s state-run five-day funeral should not go ahead.

What did the alleged victim say?

At a news conference on Monday, lawyers for the alleged victim said the mayor sexually harassed her for four years.

The woman said the mayor sent her pictures of himself in his underwear, and called her into the bedroom in his office, asking her to hug him.

The woman said she asked for help from Seoul City Hall but was ignored. She said the abuse continued even when she changed departments.

“I should have reported this in the beginning,” the alleged victim said in a letter that was read at the news conference. “I wonder if had, I wouldn’t be blaming myself now.”

She said she was “questioned all night” after complaining to the police, and that she was shocked by her former boss’s death.

“The word death was something I could not have spoken of – even during my hardest times. It was truly so disappointing and I still do not want to believe it.

“I wish the dead good will.”

What happened to Park Won-soon?

After a huge search, Mr Park’s body was found on Friday in woods at Mount Bugak in Seoul.

He left a note for his family, which was publicly released after his death.

What did the funeral petition say?

The petition on the South Korean presidential website, where people regularly start campaigns, was signed more than 560,000 times.

“Do the people need to watch a fancy five-day funeral for a famous politician whose sexual harassment allegation led to his suicide?” it asked.

“What kind of message does that send to the people? It should be a quiet, family funeral.”

On Sunday, a court in Seoul rejected an injunction to stop the public funeral.

More than 20,000 people paid their respects to Mr Park during the mourning period, and some showed their support on Monday, despite heavy rain.

Monday’s service – which was broadcast online – was limited to 100 socially-distanced mourners.

Who was Park Won-soon?

The 64-year-old became Mayor of Seoul in 2011 and won another two elections.

He was a member of President Moon’s liberal Democratic Party and was excepted to be a possible presidential candidate in 2022.

He was imprisoned in the 1970s for protesting against the country’s authoritarian rule.

Political friends and allies of Mr Park appear to want to cover their ears when it comes to the sexual allegations he faced.

When reporters have asked questions they’ve received replies like “now is not the time” and “mind your manners”.

One reporter was even sworn at over the weekend.

Those in his Democratic Party are finding it difficult to reconcile their memories of a man who fought so hard for women’s rights with the claims we have heard.

The party has had two other recent sexual abuse scandals. The former South Chungcheong governor Ahn Hee-jung is in prison after his female assistant accused him of rape.

The former Busan mayor Oh Keo-don resigned last month after a female public servant accused him of sexually assaulting her in his office.

For decades, women in this deeply patriarchal country have struggled to come forward with their claims of sexual harassment.

Things have started to change over the last couple of years as the MeToo movement gains momentum.

In their grief, it may be hard for Mr Park’s former political colleagues to take their hands away from their ears.

But many women in this country are making it clear that – if they are to have faith in those in power – it is in their interests to listen.

If you or someone you know are feeling emotionally distressed, BBC Action Line has more information.