Home » World News » Debajo, From a Former Ferris Chef, Opens in the Made Hotel

A pizzeria from Pino Luongo, Vietnamese on the Upper West Side, and more restaurant news. 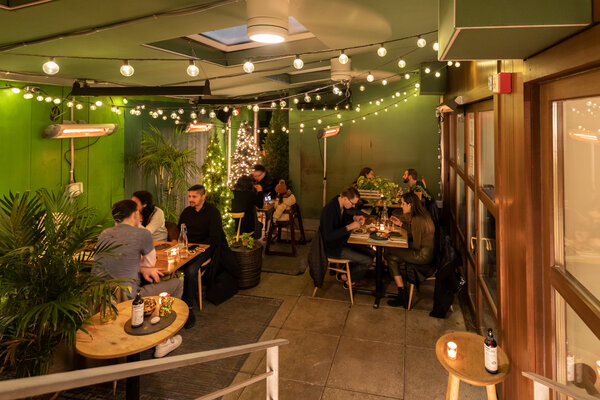 Ferris, the restaurant in the Made Hotel that got two stars from Pete Wells three years ago as a “modest restaurant that overdelivers,” closed in March as a result of the pandemic. By that time, the chef Greg Proechel, formerly of Le Turtle, who garnered positive attention, was gone for almost a year. Last fall Mr. Proechel came back and turned it into a pop-up called Day Off, with Sam Gelin, who runs the Made Hotel. That pop-up has been replaced by this new spot for tapas, with outdoor seating in its covered, heated sunken garden. Mr. Proechel called on Victor Manuel Amarilla, also in the kitchen at the Turtle, to join him as the chef. Standard-bearing tapas include plates of cheeses and cured meats, boquerones and patatas bravas; larger raciones plates include a hamburger, a crispy chicken sandwich with romesco sauce, and a short rib and lentil stew.

Ivan Orkin is taking his popular Ivan Ramen restaurant on the road. He has formed a partnership with Nick Hogan, co-founder of Flagship Restaurant Group known for its 15 Blue Sushi Sake Grills in nine states, mostly across the Midwest. As part of the partnership, Mr. Orkin will make his ramen bowls available for delivery and takeout in those markets, using the kitchens of the various grills. (The ramen bowls will not be served at the restaurants.) He will control the choice of ingredients, many imported from Japan, and the preparation. Some of the six choices are tonkotsu, spicy red chile, vegan shoyu, and Tokyo shio. And as Flagship, whose other partners are Anthony Hitchcock, Tony Gentile and Tom Allisma, opens more Blue Sushi spots, the partnership will continue. (Opens Wednesday)

Having taken over what was Giorgio DeLuca’s Giorgione restaurant in Hudson Square last fall, Pino Luongo is now turning it into this pizza specialist. (There was previously a wood-fired pizza oven on the premises.) His partners are Ciro Verdi of Da Ciro in Brooklyn, and Alessandro Bandini, the general manager of Coco Pazzo in SoHo. The menu offers buzzetti, which are like open mini-calzones made with various cheeses; panozzi sandwiches with meatballs, sausage, beef or chicken; thin focaccia made with robiola cheese and other toppings; and assorted individual-size pizzas, including the classic margherita, sausage and broccolini with provolone and Fontina, amatriciana-style, and one called pazza (meaning “crazy”) with potato, broccoli, cauliflower, Fontina and black truffle paste. For now, the restaurant offers only pickup and delivery. But, once indoor dining is approved, it will feature a bar for oysters and other seafood with sparkling wines up front, similar to the setup during the reign of Giorgione. In March, an uptown version is planned to open at First Avenue and 59th Street. (Opens Friday)

Estela’s second-floor location doesn’t allow for outdoor dining, but the restaurant has come up with a temporary solution: It has set up a street-level outdoor barbecue open on Saturdays and Sundays from noon to 4 p.m. There are a few seats on a heated sidewalk patio. Delivery and pickup are available for yakitori-style skewers, grilled wings, head-on shrimp and steak with potato chips. It will be open through Feb. 28. (Saturday)

What started as a pop-up is now a more permanent spot on the Upper West Side, which has no shortage of Asian restaurants, especially Chinese. This Vietnamese restaurant fills a gap. The menu covers banh mi sandwiches, pho noodle soups, banh cuon steamed rice rolls, crispy pork belly, spring rolls, summer rolls and a Vietnamese barbecue platter. Judging from the socially distant line for takeout, it has already earned a following.

Adjacent to the outdoor cafe of Good Enough to Eat is this new pop-up spot with socially distanced high-top tables (no chairs) filling the tented space. It’s also owned by Jeremy Wladis, with the chef Max Zumwalt, and it serves as a place holder; they’re waiting for indoor dining to resume so they can open a maki (sushi roll) and ramen restaurant planned for the location. In addition to four ramen bowls, including a mazeman (soupless) iteration, there are gyoza dumplings, roast pork bao buns and takoyaki octopus balls.

This branch of a kosher restaurant on West 69th Street offers an Italian menu of dairy and fish, including pastas, pizzas and burgers (salmon, Impossible). It has a heated sidewalk enclosure with about 20 seats and offers pickup and delivery.

Attempts to revive the Automat, with no-contact food service, have shown up from time to time over the years. The latest, in the Newport development of Jersey City, features comfort food like pastrami Reuben flatbread, wedge salad, spiced roasted cauliflower, a half rotisserie chicken dinner, and a waffle sandwich for breakfast. Smartphone ordering and notifications when the food is ready — it’s said to be made to order — bring the premise up-to-date. (Wednesday)

The South of Fifth neighborhood of Miami Beach now has its own edition of Carbone, Major Food Group’s popular take on old-school Italian with a wiseguys wink. This one’s elaborate design by Ken Fulk also nods to a more tropical vibe with rattan, greenery and ceiling fans on the outdoor patio.

London did well in the latest Michelin Guide, announced Monday. With the addition of two new places in the highest, three-star category, the city now has seven at that level. The newcomers are restaurants where women are in the kitchen: Hélène Darroze at the Connaught and Core by Clare Smyth. This honor brings Ms. Darroze’s total star count to five, including the two she was just awarded for Marsan in Paris. For Ms. Smyth, it represents a stunning achievement for her restaurant, which is less than three years old. The number of two-star restaurants was increased by three, including the chef Andrew Wong’s A. Wong, the first Chinese restaurant in Britain to reach that level. And in the one-star category, a notable addition is Davies and Brook, a restaurant in Claridge’s Hotel run by Daniel Humm of Eleven Madison Park in New York. This year’s guide will be on their app.