Incumbent Dutch Prime Minister Mark Rutte looks to be on track to win a fourth term in office, with his conservative party leading a first exit poll. The Netherlands election has been dominated by the coronavirus pandemic, with voting extended to prevent further spreading of the virus.

Prime Minister Rutte’s VVD party was projected to take 35 out 150 seats in the lower house, a clear mandate to form a new coalition government.

The pro-EU, centre-left D-66 was seen coming in second place at 27 seats, the exit poll showed.

The initial numbers from the poll indicated Mr Rutte will need to form a coalition with at least two other parties to get a majority of 76 seats in parliament. 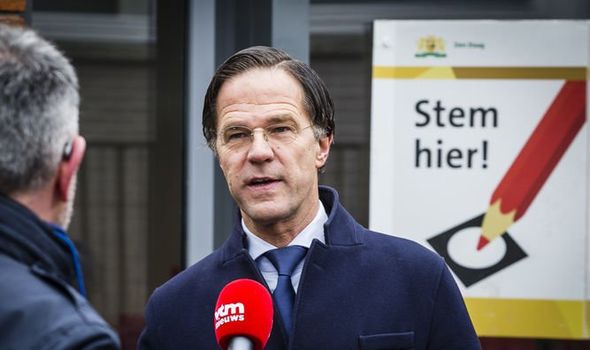 The Netherlands is one of the first major European Union economies to hold elections during the COVID-19 crisis.

To prevent further spreading of the virus, voting was held over three days.

Currently, there is a night-time curfew in place due to continuing high infection rates, and a ban on public gatherings during the day.

So, the campaign was carried out mostly through television debates.

By the end of Wednesday afternoon, turnout was counted at 81 percent, compared to 82 percent four years ago.

However, in this election elderly voters were permitted to use mail-in ballots.