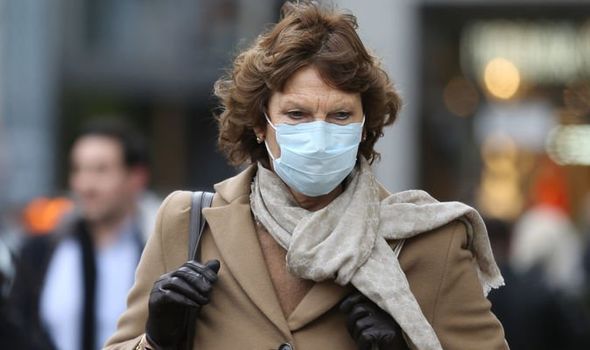 France, which has recorded nearly 20,000 deaths as a result of the pandemic and has the fourth-highest death toll in the world, is starting to look at ways to exit its strict lockdown.  “The president is mistaken – the French need to start wearing face masks [when they venture outside] right now,” M Juvin told France Info radio, adding masks should be a central part of the government’s lockdown exit strategy.

“I think that on this subject, the president is wrong,” he insisted, adding “a face mask that covers the mouth and nose – even one that is homemade – is better than nothing”.

The centrist government must perform “massive testing” to reveal the full spread of the virus and ensure the upcoming deconfinement is a success, he continued: “When you launch a war, you need enough ammunition.”

M Juvin’s comments came hours before Prime Minister Edouard Philippe said France was starting to push back the coronavirus as new hospitalisations and the number of serious cases continued to drop.

“We are scoring points against the epidemic,” M Philippe told a press briefing, adding the “situation is improving gradually, slowly, but surely” and the epidemic “is slowing”.

But he insisted the virtual lockdown in place since March 17 to contain the spread of the disease had to be strictly respected until May 11, when it will start being lifted in phases.

“We are not out of the health crisis yet,” M Philippe said, adding that lifting social distancing measures too soon risked triggering a second wave of the epidemic.

“To imagine that, because the situation has stopped worsening and is starting to improve, the epidemic is behind us, would be a mistake,” he warned.

“Our life from May 11 will not be like our life before, not immediately, and probably not for a long time.”

On the controversial question of face masks, M Philippe said people would “probably” have to wear them on public transport from May 11, though health minister Olivier Véran stressed the jury was still out on their efficacy as a means of protection.

France will soon be producing some 17 million reusable fabric masks for the general public per week, M Véran added. Eight million masks were produced in France last week, while tens of millions more have been ordered from abroad.

Health chief Jerome Salomon, who also took part in the briefing, said that France had reported 395 deaths from coronavirus infections in the last 24 hours, bringing the total toll to 19,718 – the fourth-highest in the world.

Of the 395 deaths, 227 were recorded in hospitals, the lowest daily count since March 23.

In another positive sign, the number of people in hospital fell for the fifth day in a row to 30,610 – a decline of 29, M Salomon said.

The total number of people in intensive care units fell for the 11th consecutive day to 5,744, he added – the lowest level since March 30.