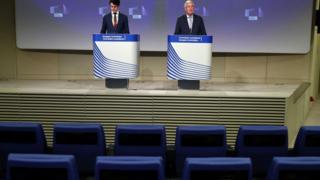 EU and UK negotiators agreed on one thing on Friday – they’d made precious little progress in trade talks so far when it comes to the key sticking points between the two sides.

They include fish, competition rules, even the form the trade deal should take (one big agreement, as Brussels demands, or the UK preference for a number of mini deals alongside a basic free trade agreement).

Each side secretly, or not so secretly, views the other as misguided ideologues: The EU caricature, rigid with quasi-religious belief in the “integrity of the single market.” The UK government stereotype, described off the record in EU circles, as unquestioning or unthinking believers in “national sovereignty over everything”.

Both sides called on the other on Friday to get real and change their approach. Otherwise, borrowing the words of the EU’s chief negotiator, they’d remain determined but no longer hopeful a deal could be struck.

Frankly, this rhetoric ricocheting right now between London and Brussels is not exactly surprising. Clashes are quite common in high-level negotiations after each side makes its position clear and sticking points become screamingly obvious.

But in normal trade talks, weeks and months then follow in which red lines can be watered down over cups of coffee, or negotiators taking a stroll round the block to chew over a problem.

A mixture of Covid-19 and Boris Johnson’s insistence that the transition period not be extended, rob EU and UK negotiators of that luxury. The virus necessitates screen-to-screen, rather than face-to-face talks. The UK government’s demand that negotiations be finished by the end of the year means time is uncomfortably tight.

Some progress is being made, of course – on basic free trade issues, on energy, on transport. And both sides are showing a bit of leg.

The EU admits it has taken a maximalist approach on fishing, suggesting wiggle room there. The UK says it will abandon its goal of having 100% tariff and quota free access to the single market, if that will help calm EU fears about unfair competition. (The EU argues this too is unrealistic, considering the little time left to argue tariffs lines individually, but it’s an indication from the UK that it is open to discussion.)

But the storm clouds overhanging EU-UK negotiations aren’t fake news. By the end of next month, the two sides must formally announce whether or not talks will be extended.

Brussels expects the UK to say ‘No’. That has been the oft-repeated message out of Downing Street. Expect then an announcement in Brussels and in London that they will begin stepping up no-deal preparations, as they head into an autumn of fraught negotiation.