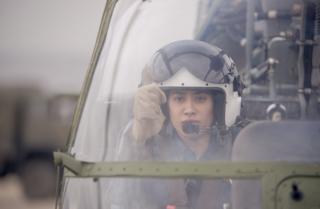 A Bollywood film inspired by the life of India’s first female pilot to fly in combat has been accused of showing the air force in a negative light, writes the BBC’s Geeta Pandey in Delhi.

In the summer of 1999, as India and Pakistan traded missiles and gunfire, Flight Lieutenant Gunjan Saxena flew repeatedly over the Line of Control, the disputed border that divides Kashmir between the two South Asian neighbours.

Conflict had erupted after Pakistani forces infiltrated into the Indian side of the de facto border and occupied icy heights in Kargil which is situated in Indian-administered Kashmir.

“I spent about 20 days in June flying a helicopter on recce missions,” Flt Lt Saxena told the BBC. “My main job was to find out where enemy posts were, do battle damage assessment for the India army and evacuate casualty.”

She was among the first batch of women to join the Indian air force in 1994 – the year they started inducting female transport and helicopter pilots – and among two female pilots who flew reconnaissance flights during the Kargil conflict.

I asked her if she ever felt fear with missiles and bullets flying around her in the battlefield – she once had a close shave when a missile missed her helicopter by inches.

“No, never,” came the prompt reply. “It was risky, but we accepted the risk willingly.”

She received a gallantry award in her home state of Uttar Pradesh for “displaying exemplary courage” for her role in the conflict and has been hailed as “a pioneer” who “broke the glass ceiling” and inspired many young women to join the air force.

“I never saw a ceiling,” she laughs, “and never went there to break one. If I broke it, I’m glad. And if I inspired others to break it, I’m fortunate.”

“She’s an inspiration,” says Kirandeep Singh, one of the co-authors of the autobiography. “Over the years, people had begun to forget her achievement and it was an attempt to revive an interest in her story.”

“It required a lot of courage to go on the battlefield just a few hundred metres form the Line of Control and within the range of Pakistan’s small arms fire and carry out recce missions and casualty evacuations,” adds Nirvan Singh, the other co-author. “In the chaos of battle, her instinct and calm made a perceptible difference.”

The film, which stars Janhvi Kapoor in the lead role, has raced to the top of the charts of Netflix in India and received warm reviews from critics and audiences – one newspaper has described it as “a deeply moving tale of a feminist father and his feisty daughter”.

Flt Lt Saxena says she has received “lots of messages from little girls saying that after watching the film, they too want to join the air force and become pilots”.

But the biopic has also landed in the middle of an unseemly row, mostly over its portrayal of sexism and gender disparity in the air force.

In the movie, 24-year-old Flt Lt Saxena lands up at a base where there is no ladies’ toilet or changing room – because, as the senior officer informs her, “this place isn’t made for women”. She is in the midst of men who are mean and faces sexism that’s blatant.

This portrayal has obviously not gone down well with the Indian air force – even though the film starts with a disclaimer that says its makers have “taken creative liberties and dramatised events”.

“It is a well-known fact that the Indian Air Force (IAF) has the largest number of women officers serving actively,” an IAF spokesperson said.

“The IAF was the first to open all its branches to women officers, including combat roles in 2015. This wouldn’t have been possible without an unbiased policy. Everything in the defence forces is done on merit alone.”

The air force has sent a letter expressing their disappointment to producers Dharma Productions, the Central Board of Film Certification (CBFC) and Netflix, the spokesperson said.

Many others have also complained about the film. The head of India’s National Commission for Women has asked the filmmakers to apologise and stop screening it, and there have been calls to boycott it.

Senior journalist Shekhar Gupta called the film “a national embarrassment” and said that there should be some “limitations to how much liberty one can take with the facts”.

In the past few days, several female officers who were Flt Lt Saxena’s contemporaries have also spoken out – some have talked about the subtle sexism and prejudices they encountered in the air force; but others have criticised the film for “twisting the facts” and “peddling lies”.

One former officer even claimed that it was her, and not Flt Lt Saxena, who was the first female pilot to fly in Kargil – a claim that Flt Lt Saxena has strongly rejected, pointing out that her “firsts” are well documented in the air force records.

I asked her to set the record straight – I have watched the film and read the book and wanted to know which one is the real deal.

The film and the autobiography, she agrees, are “very different”.

“I liked the film as a viewer, it’s very entertaining, but it’s been dramatised,” she says, adding that the book is the real deal.

“Twenty-five years back when I joined the air force, society was very different. And we were the first female pilots, so it was a new situation for the air force too. There were real issues – there was no ladies’ toilet or changing room on the base – but they dealt with them.

“Socially too, it was a new situation for them so initially they were awkward and hesitant, so they took their time to adjust. But the change and acceptance did come and it didn’t hamper our duty,” she adds.

The intention of the film and the book, she says, is not to create any controversy, but to inspire the future generations – “not just those wanting to join the air force, but we want to get the message across to everyone who has a dream that there can be hurdles, but keep focus and believe in yourself”.