Four passengers die on board cruise ship stranded near Panama

The Zaandam, with 1,800 passengers, has been prevented from docking in several countries due to coronavirus fears. 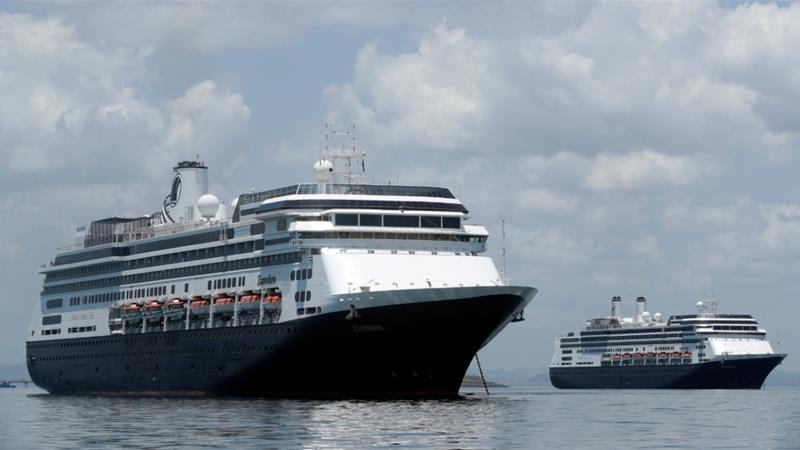 Four passengers have died on board a cruise ship carrying several people with flu-like symptoms that has been stranded off the Pacific coast of South America for several days, the liner company said on Friday.

The Zaandam, with 1,800 passengers on board, is currently in Panama’s territorial waters, having been prevented from docking in several countries due to coronavirus fears.

“Holland America Line can confirm that four older guests have passed away on Zaandam,” the Dutch-owned company said in a statement.

“Yesterday a number of patients with respiratory symptoms were tested for Covid-19 and two individuals tested positive.”

The Zaandam liner left Buenos Aires on March 7 and was supposed to arrive last Saturday at San Antonio, near Santiago in Chile.

Since a brief stop in Punta Arenas in Chilean Patagonia on March 14, it was turned away from several ports after reporting that 42 people on board were suffering from flu-like symptoms.

It is trying to head to Florida, but to get there, it must pass through the Panama Canal. On Friday, authorities denied the ship access to the waterway.

The company said 53 of the 1,243 guests and 85 of the 586 crew on board the Zaandam “have reported to the ship’s medical center with influenza-like symptoms”.

It plans to transfer those passengers that have not been ill or exposed to someone who has been to the Rotterdam, while leaving ill passengers and all crew on board the Zaandam.

“While the onward plan for both ships is still being finalised, we continue to work with the Panamanian authorities on approval to transit the Panama Canal for sailing to Fort Lauderdale, Florida,” said Holland America.

On Wednesday, Panama’s Health Minister Rosario Turner had said the Zaandam would be allowed to pass through the canal.

But on Friday morning, Panama’s seaway administrator Ricaurte Vasquez said the health ministry had denied access to the liner.