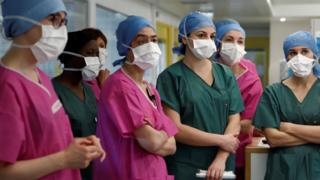 France has reported 833 new coronavirus deaths in the past day, the highest daily toll since its outbreak began.

The total number of people who have died after testing positive for Covid-19 now stands at 8,911, while the number of infections is 98,010.

Italy’s daily death toll also rose on Monday after several days of slowing, but Spain’s fell for a fourth day.

It came as UK Prime Minister Boris Johnson was moved to intensive care at a hospital in London after his Covid-19 symptoms worsened.

Meanwhile, Germany’s Chancellor Angela Merkel said the pandemic represented the biggest challenge the European Union had ever faced and that her government was ready to contribute to helping the bloc economically.

What are the latest figures from France?

The data released by the French health ministry on Monday evening showed that 605 people had died in hospitals during the past 24 hours and another 228 had died in nursing homes – both 10% increases.

“It is not over. Far from that. The path is long. The figures that I have announced show this,” Mr Véran said. “Stay at home and continue this confinement effort.”

There was nevertheless some positive news, with the number of people being treated in intensive care only rising by 1.3% to 7,072.

Mr Véran said the government would also start a “vast operation” to screen nursing homes, which account for 27% of the death toll, to better protect residents.

France’s Equality Minister, Marlène Schiappa, meanwhile said an abuse hotline had been set up for the perpetrators of domestic violence to seek help, as families struggle under lockdown.

What is happening elsewhere in Europe?

The pandemic has claimed more than 50,000 lives across the continent.

The death toll in Italy is the highest in the world, standing at 16,523. 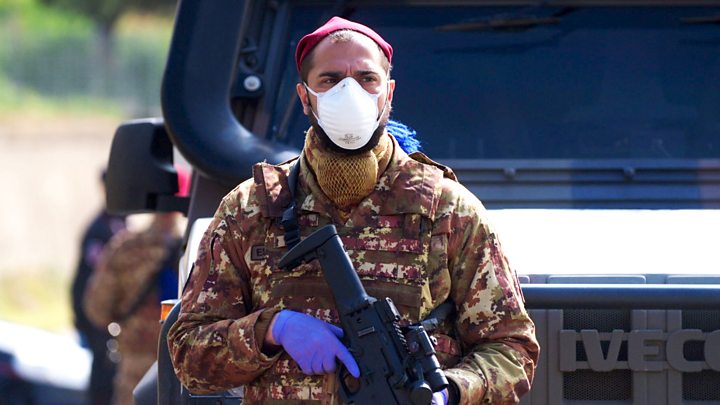 On Monday, the Italian government reported 636 new deaths. That is 111 higher than Sunday’s toll – the lowest since 19 March – but 45 lower than Saturday’s.

The number of new infections increased by 1,941, but continued a downward trend.

In Spain, the world’s second worst hit country, the daily number of deaths continued to fall, boosting hopes that it had passed the outbreak’s peak. Monday’s increase of 637 – the lowest for 13 days – means 13,055 people have died in total.

In the UK, the Department of Health said on Monday that 439 more people had died in hospital after testing positive for coronavirus, taking the total to 5,373.

It is the second day in a row the figure has fallen. But Professor Dame Angela McLean, the government’s deputy chief scientific adviser, said it was too early to say whether social distancing was working and that the outbreak was slowing.

But she warned that it would only happen if people respected the current measures and that the number of infections remained stable.

“This will probably be a bit like walking the tightrope. If we stand still along the way we could fall and if we go too fast it can go wrong. Therefore, we must take one cautious step at a time,” she told a briefing.

Austrian Chancellor Sebastian Kurz also said he was considering whether to ease restrictions, including allowing some non-essential shops to re-open after Easter.

What is Germany’s chancellor saying?

“Germany will only do well, if Europe does well,” Angela Merkel said on Monday. It was a clear call for solidarity with southern European countries, hit hard by the pandemic. Germany would play its part, she said, both to provide emergency aid and to rebuild the economy.

But what that means exactly is a fierce debate in Germany and it opens old wounds. During the financial crisis a decade ago, Berlin and other northern European countries believed “eurobonds” – sharing debt with weaker southern European economies – undermined the credibility of the entire eurozone.

That position is still held by Mrs Merkel’s government, which wants to set up an EU rescue fund and lend using mechanisms set up during the financial crisis.

But the mood is changing in Germany. Economists, politicians and commentators who once railed against mutualising eurozone debt to bail out Greece, are calling for exactly that to help southern Europe deal with the coronavirus crisis.