Fury in Kenya over police brutality amid coronavirus curfew

Growing calls for police to be held accountable for excessive violence used to enforce COVID-19-related restrictions. 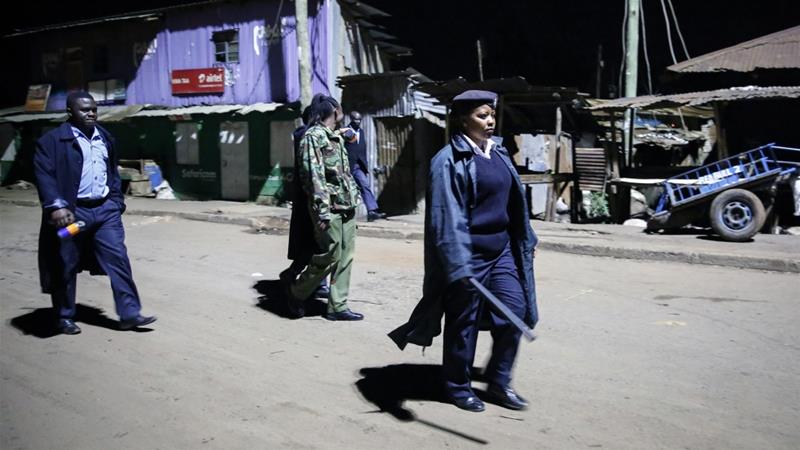 With a growing customer base, she would earn on good days up to 1,500 Kenyan shillings ($15) – but all that changed last week.

On the evening of March 27, Nyambura was, as usual, walking the streets of Mathare, selling to her customers who drink tea in the morning and coffee after work.

But at 7pm, police descended on the area to enforce a dusk-to-dawn curfew announced by the government as part of a series of sweeping measures aimed at slowing the spread of the coronavirus pandemic.

The officers fired tear gas, shot guns in the air and beat people with canes and rubber hoses, residents said. Nyambura was hit while trying to flee the scene, breaking in the process one of her flasks that she uses to sell coffee.

“There was no warning, they just started to beat people,” Nyambura said on the phone. “Everyone on the road – it didn’t matter your age, even grandparents – all were being beaten.”

According to Nyambura, many people in the area had no idea the 7pm-to-5am curfew was actually in place. “It was a surprise because most slum people don’t have a TV; they get information from one another and don’t always get the right information.”

Informal workers such as Nyambura are disproportionately bearing the brunt of the curfew crackdown. In areas like Mathare, where people often live in poorly built dwellings housing entire families in one or two rooms, most business takes place outside.

This means forcing people to be home by 7pm significantly reduces working hours for those selling goods from roadside stands and outdoor markets, further exacerbating the economic hardship brought on by the coronavirus.

Street vendors and workers with long commutes – some of the poorest and most vulnerable groups in Nairobi – are the ones most at risk of being caught outside and punished by the police. Additionally, these groups are the least likely to be successful reporting such abuses, activists say.

According to Michael Ndung’u, a human rights advocate and youth leader with the Kiamaiko Community Social Justice Centre, this comes down to a basic lack of trust between underserved communities and the police.

“We have tried to bring the police and the people together, but that can’t happen when they see the police shooting people,” Ndung’u said. “This is not a war, this is a disease. You are supposed to treat people in a manner that will help the community … not treating people like animals.”

While officials and others in Kenya defend the curfew as a crucial tool in the fight against COVID-19, the highly infectious respiratory disease caused by the new coronavirus, its implementation has been widely criticised.

In the coastal city of Mombasa, officers were filmed beating people waiting for a passenger ferry, as well as journalists covering the events, two hours before the start of the curfew on Friday. The next day, a motorbike taxi driver was assaulted by the police after reportedly dropping a pregnant woman off at the hospital and later died of his injuries.

When asked about the violence in Mombasa, police spokesman Charles Owino said the incidents were “regrettable” but defended the use of force. “This is a serious war against a serious disease … When instructions have been given that we are going to have a curfew, they must be followed … I have to particularly blame members of the public because we are protecting life.”

President Uhuru Kenyatta has since apologised for the violence following the enforcement of the curfew.

“I want to apologise to all Kenyans for … some excesses that were conducted,” he said on Wednesday in Nairobi. “But I want to assure you that if we work together, if we all understand that this problem needs all of us, and if we pull in the same direction, we will overcome.”

His comments came a day after police said they had opened an investigation into the death of a 13-year-old boy on Monday evening, when officers attempted to clear out street vendors in the informal settlement of Kiamaiko in Nairobi.

According to witnesses, rocks were thrown and officers began firing live rounds into the air. Yassin Hussein Moyo, who was out on the balcony of his house alongside other children watching the scene, was hit in the stomach by one of the bullets and died, his family said.

In a matter of days, the death toll from curfew enforcement has already exceeded the official coronavirus death toll of one, while reports of police beatings continue to emerge.

“Yesterday, after the apology they were still beating people,” Ndung’u said on Thursday. “My neighbour arrived from his job as a matatu tout late yesterday, and was confronted outside his gate and beaten with sticks and pipes. Now he can’t even walk outside, it was only 7:20pm, he was 20 minutes late.”

Despite several requests for comment, the Kenya Police Service declined to comment further on the actions of their officers. 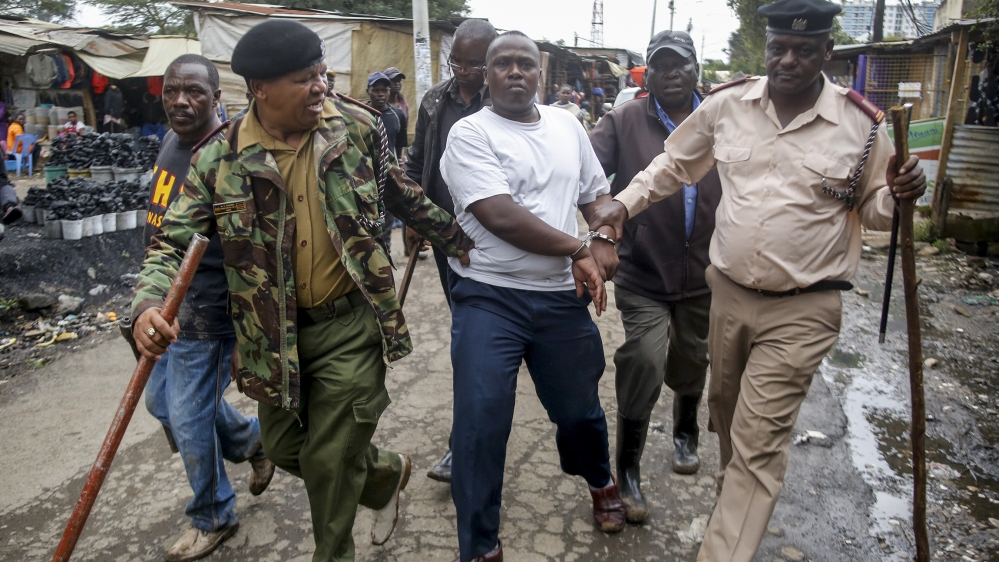 The incidents have renewed anger in Kenya over police brutality, a pervasive issue in high crime areas such as Kiamaiko, where trust in authorities is low.

In a February report detailing the killing of at least eight people in Nairobi’s low-income neighbourhoods, Human Rights Watch said police “continue to kill crime suspects and protesters in cold blood despite persistent calls to end the killings and the use of excessive force”.

‘We are getting angry’

Hassan Usman lives in Kiamaiko, near where Monday’s shooting took place. Since COVID-19 entered Kenya, he has seen his work at the local goat market and surrounding slaughterhouses dry up, slashing his income at a time when all seven of his children are staying home due to the closure of schools.

For Usman, the curfew is a step too far, crippling people’s livelihoods during an already tough time and further stoking anger at the police.

“They come at night to harass people here and close businesses by force, even if you have meat you still need to sell,” Usman said. “We are getting angry, it has affected many people. If you want people to remain at home under curfew, you should give them something to eat and drink.”

For him, the curfew is another burden for the working class, a poorly designed measure from a government that is out of touch with the situation on the ground.

While Usman said he is worried about COVID-19, hunger, rising crime and avoiding police beatings are much more pressing issues.

“We are hand to mouth, people are sleeping hungry,” Usman said. “If you defend against corona[virus] this way, many people will die of hunger.”

Back in Mathare, Nyambura has given up selling coffee for now, switching to bananas which bring in only 200 shillings ($2) a day. Since her customers drank only coffee in the evening, she decided the extra money is not worth risking a beating.

It is a hard transition, especially now that she has temporarily adopted a street child who has nowhere to go during the curfew.

Nyambura feels that her community, already struggling with a slowing economy, is being unfairly targeted.

“We are essentially helpless, we can’t report the police. Most people they prefer corona[virus] then the beatings of the police.”