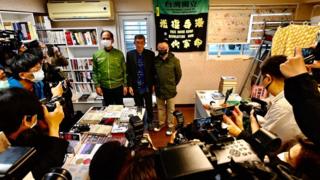 A Hong Kong bookseller who defied mainland China has reopened his bookshop in Taiwan.

Lam Wing-kee was one of five booksellers detained in 2015 after selling material critical of the political elite on China’s mainland.

He fled to Taiwan last year for fear he would be sent back to China under Hong Kong’s proposed extradition bill.

The authorities there say the reopening of the bookshop is a symbol of democracy and freedom in Taiwan.

“The reopening is very meaningful,” Mr Lam told reporters in the new store in the capital, Taipei.

“Causeway Bay Books was destroyed by China through violent means. The reopening proves Taiwan is a place with freedom and democracy, and we still have the right to read books,” he added.

Mr Lam had said he wanted a low-key opening because of Covid-19, but his small bookstore on the 10th floor of a building in a popular commercial district of Taipei was crowded with journalists and supporters, as well as flowers and a message from Taiwan’s President Tsai Ing-wen, reports the BBC’s Cindy Sui in Taipei.

He called on those who took to Hong Kong’s streets last year and who thought their safety was at risk to come to Taiwan and continue their rebellion from outside. He said by opening his bookstore, he was also rebelling.

In 2015, Mr Lam was arrested during a visit to mainland China and held for more than 400 days.

He was among several bookshop owners and staff who disappeared and were later found to have been detained by Chinese authorities, as part of a crackdown on bookshops in the former British colony that sold publications critical of China’s leaders.

Months ago, he fled to Taiwan as Hong Kong considered a law that would have allowed extradition to mainland China.

Mr Lam’s crowdfunding campaign to “reopen” the Causeway Bay bookstore – the name of his former shop in Hong Kong – raised more than T$3m on its first day.

In June 2016, newly returned to Hong Kong, he told journalists he had been released on condition he retrieve a hard disk filled with the names of people, mainly mainland Chinese, who had bought books from his publishing house.

But he said he had no intention of handing over the data and he detailed his imprisonment – in solitary confinement under 24-hour surveillance, during which he contemplated suicide.

A confession broadcast on Chinese television was, he said, staged and acted out to a script.

China said Mr Lam had broken the terms of his release.

When Hong Kong’s political leader, Carrie Lam, proposed a new law that would allow extradition to mainland China, Mr Lam feared he would be “top of the list”.