World News How to slow a resurgent virus? Europe and the U.S. employ divergent strategies.

In today’s edition of the Morning newsletter, David Leonhardt writes:

As the coronavirus has surged again in recent weeks, much of the United States has chosen to keep restaurants open and schools closed. Much of Europe has done the opposite.

The European approach seems to be working better.

Look at this chart, which shows the number of new daily virus cases in five countries, adjusted for population size: 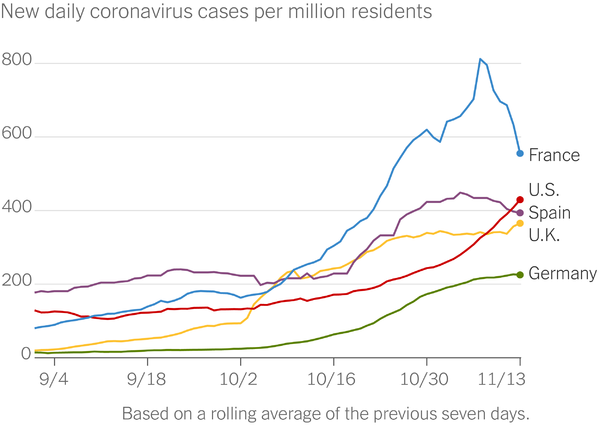 As you can see, both the U.S. and Europe have been coping with severe outbreaks, with caseloads rising even faster in much of Europe than in the U.S. during much of this fall. But over the past two weeks, France, Germany, Spain and Britain have managed to reduce their growth rates.

What is Europe doing differently? It is cracking down on the kind of indoor gatherings that most commonly spread the virus. England closed pubs, restaurants, gyms and more on Nov. 5 and announced they would remain closed until at least Dec. 2. France, Germany’s regional governments and the Catalonia region of Spain have also shut restaurants, among other businesses.

“I’m sure the Europeans didn’t want to restrict their activities any more than we do,” Janet Baseman, an epidemiologist at the University of Washington, told me over the weekend. “Everyone is tired and ready for this to end, but we have to accept the reality of the data before us.”

Many Americans have resisted accepting that reality. Across much of the country, restaurants remain open for indoor dining. Last week, New York State announced a new policy that public health experts consider to be a bizarre middle ground: Businesses with a liquor license can stay open until 10 p.m.

The one indoor activity that appears to present less risk is school, especially elementary school. Why? Young children seem to spread the virus less often than adults do. “Research has shown that if you put social-distancing protocols in place, school is actually quite a safe environment,” Andreas Schleicher, who studies schools for the Organisation for Economic Co-operation and Development in Paris, told NPR.

Closing schools and switching entirely to remote learning, on the other hand, has big social costs. Children are learning less, and many parents, mostly mothers, have dropped out of the labor force. The U.S. is suffering from both of these problems and from a raging pandemic.

There are no easy answers, to be sure. Closing restaurants and other businesses creates economic hardship (which some European countries are trying to reduce through government aid).

And the virus is now spreading so rapidly in the U.S. that keeping schools open does pose risks, including the chance that teachers, janitors and other workers infect one another. To keep schools open in a safe way, the U.S. would probably first need to close other public places. Only a few states — including Michigan, Oregon, New Mexico and Washington — have closed indoor dining recently.

But if there are no perfect solutions to the pandemic, there are better and worse ones. Right now, the U.S. seems to be falling well short of what’s possible.