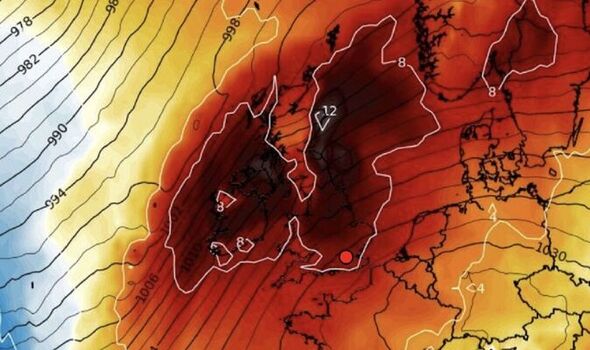 Thermometers are forecast to shoot skywards this week as mild air from France and Spain threatens to obliterate temperature records. Southern and south-eastern England could hit 17C or higher by the weekend with Scotland and the north reaching mid-double figures.

Mild weather will be driven by high pressure stretching from Eastern Europe towards Britain, a so-called retrogression effect as weather features typically move from west to east.

The change in weather patterns will also dry up the rain and bring a mini-Indian summer blast of warmth to parts of the country.

Jim Dale, meteorologist for British Weather Services, said: “It is going to be unusually mild for the time of year, and through the second half of the week we could be coming close to knocking on the door of some daily records for the month.

“High pressure is moving from Eastern Europe towards the UK, in the opposite direction from what you would typically expect.

“This high will move in through France and Spain drawing warm air up from the south and the southwest and then from a more south-easterly direction.

“It is very late in the year to be seeing temperatures like this.”

The warm spell will be the latest bizarre weather event after joint the hottest summer on record which saw 40.3C recorded in Lincolnshire led into unusually an unusually mild start to autumn.

Mild southerly winds are likely to dominate the weather through the end of the week and into the weekend, according to the Met Office.

However, north-western regions will have more of a risk of wind and rain being close to an area of low pressure.

Met Office meteorologist Aidan McGivern said: “By the end of next week, the most likely weather pattern is a southerly airflow and still some unsettled weather towards the northwest.

“Beyond the 10 days, this weather pattern and this retrogression may end up with higher pressure quite close to the UK.

“Through the middle of November, there is a trend for high pressure coming in from the continent and starting to take over.”

A ‘dome of warmth’ which will drive the warm spell will be thrust towards Britain from the Continent by the jet stream.

“The jet stream’s path is set to push a dome of warmth up across western Europe.

“A moist and mild subtropical airflow will lift daytime highs back up into the mid-teens quite widely as we head into the new week, despite a good deal of cloud and some rain at times.”

Northern and western Britain are in the firing line for further unsettled conditions through the start of the week, he warned.

He added: “But with time, as air from a southern European source arrives, there’ll be a drying trend.

“And where the sun comes out, so the mercury could even climb into the high teens locally.”