‘I’m in coronavirus lockdown with my abuser’ 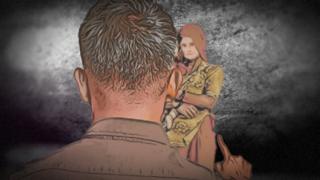 With much of the world on coronavirus lockdown, there are warnings that those living with domestic abuse could become hidden victims of the pandemic.

In the UK, calls to the national abuse hotline went up by 65% this weekend, according to the domestic abuse commissioner for England and Wales. Meanwhile, the UN has warned that women in poorer countries and smaller homes are likely to have fewer ways to report abuse.

The BBC has spoken to two women who are currently under lockdown with men who they say have abused them.

This interview was conducted the day before India announced a 21-day complete lockdown in order to curb the spread of coronavirus.

Geeta wakes up at 5am, her husband is lying next to her on the floor. He’s snoring loudly.

The previous night he had come home drunk and upset. The coronavirus outbreak meant fewer people were using public transport, so as an autowallah, or rickshaw driver, Vijay’s income had dropped from 1,500 rupees a day (just over £16), to 700 rupees a day.

“How many days will be like this?” he’d shouted, throwing a bottle of the spirit he’d been drinking against the wall. Geeta’s children scrambled behind her for shelter.

Thankfully, Vijay climbed onto the small mattress the whole family share and fell asleep soon after his outburst.

“It took a while to calm the children,” says Geeta. “They’ve seen their father angry many times in their life but the past few weeks it has been worse. They’ve seen him throw things against the wall and pull me by the hair.”

Geeta’s husband has hit her more times than she can remember, the first time on their wedding night. She tried to leave him once, but he wouldn’t let her take the children.

They live in a low-income neighbourhood, called a mohalla, in a rural area.

On a typical day she would walk a kilometre to the nearest well to fetch water for the day. Once she had taken it home, she’d chat with neighbours waiting for the grocer to arrive with his cart of vegetables.

After buying the household food for the day, Geeta would start preparing breakfast. Her husband would leave at around 7am, returning for lunch and a nap, leaving again after the two older children returned from school.

“But things changed when the school closed on the 14th,” she says. “Then the children were home constantly and they began to irritate my husband.

“Usually he saves his anger for me, but he has begun to yell at them for minor things like leaving a cup on the floor. I then say something to divert his attention so he can be angry at me, but the more time we are together, the less I can think of to distract him.”

Geeta had a plan. While her husband was at work, and after cleaning the house, she would walk to a nondescript office building just outside the neighbourhood.

There she used to attend a secret class set up by community organisers where women learn to sew, read and write.

Geeta wants to get enough skills to be financially independent and move out with her children. At the class, she also met with counsellors who are trained to help domestic violence victims.

But India’s 21-day lockdown, which began on 24 March, has put a stop to this. The classes have ended and it’s impossible for community counsellors to visit vulnerable women.

Vimlesh Solanki, a volunteer for a Sambhali Trust, an organisation that supports women in Jodhpur, the second largest city in Rajasthan, says coronavirus has put women in danger.

“A complete lockdown means every day is completely disturbed. There are now no local grocers with carts so they need to travel further to the supermarket for food every day.

“Stressful situations like this means that there are more things that trigger their already abusive partners.”

Kai got out her phone and typed slowly. “Mom wants me to stay with you.” She pressed send. A reply came quickly: “That’s fine.”

Last week, the teenager stepped back inside the house she vowed she would never enter again. “The second I walked back in my brain shut down,” she says softly. “Everything turned off, every feeling.”

She had moved back in with her father, the man who she says physically and sexually abused her for years.

Two weeks ago Kai thought coronavirus was something that would blow over with a passing news cycle. Then things changed.

The staff at the shop where her mother worked were getting restless. News that the virus had crossed shores, spread to more than 170 countries and now reached New York, was making people nervous.

Working at a shop meant interacting with customers on a daily basis.

Kai’s mum and her co-workers worried about contact with the customers, but they didn’t have to worry for long. The shop announced it would close indefinitely and staff would be made redundant.

Kai’s mother lost her $15-an-hour (£12) job and was told she would only have health insurance for five days.

It began to take a toll on Kai’s mother, who had suffered from mental health challenges most of Kai’s life.

“She had an episode,” says Kai. “She shouted ‘things are crazy here, you should go to your dad’s house'”.

The words sent a cold pang of distress through Kai’s veins. She retreated to her room, hoping that if she gave her mother some time things may blow over. But when she returned downstairs her mother simply said: “Why are you still here?”

It was only a few months since Kai had started therapy for the years of physical and sexual abuse she had experienced with her father. She says he had abused her since she was a toddler. She still hadn’t confided the full extent of the abuse to her mother and sister.

It was early days, but Kai says the therapy was helping her and she felt more in control. She was feeling more hopeful for the future.

Then the shelter where she saw her therapist announced that the coronavirus outbreak meant it had to close. And last week, she moved back in with her father.

She knows he’s awake when she hears him making his breakfast smoothie. “I hate it so much, it’s so loud, the sound of the blender petrifies me. It’s the start of my day, when I have to be vigilant.”

Kai hasn’t slept much since she moved back in, her door doesn’t have a lock.

There was a routine to the physical abuse, it happened only when Kai did something to upset him. So she plans to stay out of his way and now only leaves her room to run to the bathroom and make herself something to eat in the kitchen.

The last time they were stuck together the house lost power and the abuse was particularly bad.

“He acts like we are living through a strange time in history, but doesn’t mention anything about the abuse,” she says. “That makes me feel like I’m going crazy. He hasn’t done anything yet but the anticipation is killing me.”

She hopes that her mother will let her come back soon, or the coronavirus outbreak ends and she can find somewhere else to live.

“We’re trying to make sure people realise that the police are anticipating that domestic abuse will increase, that they’re planning for that,” she told the BBC.

“And they’re very clear that these are prioritised calls. So you can make silent 999 calls by waiting for the call handler to pick up making some kind of a cough or any sound at all, and pressing 5,5.”

She added that women with insecure immigration status should have “all barriers removed, without fear of deportation, when reporting violence at this time”, with more funding for key workers in refuges.

She also called for workers in social care and within specialist services to receive protective equipment during the virus outbreak.

This is a sentiment echoed by Phumzile Mlambo-Ngcuka, Executive Director of UN Women, who told the BBC that there’s an urgent need for people working with vulnerable women to be given protective clothing.

“What we need is funding for field workers with PPE to reach communities and check in on vulnerable women. This needs to be a priority and there needs to be urgent global government funding for this.”

She said that unlike the US and the UK, where national abuse hotlines have seen increased calls, the opposite will likely be the case in more developing countries.

“It is impossible for women from lower socio-economic backgrounds, in several countries, to report cases of domestic violence as they are living in one or two room homes with their abusers.

“It was only in the months after the worst of the Ebola outbreak in West Africa where we learned of increases in gender-based violence at home.”

Meanwhile, Ms Jacobs says now is the time for a proactive approach to dealing with domestic abuse in the UK.

“We’ve heard about these vast amounts of people who are recruited to be NHS volunteers. We need to make sure that they have the information they need to spot domestic violence because they will be our eyes and ears out and about in the community.”

The names of the two women have been changed.