The worrying signs were all there: fatigue, high fever, no ability to taste or smell.

Still, Ahmed*, a salesman in a hardware shop in the suburbs of Damascus, never considered getting tested for coronavirus or going to the hospital. The first option was unaffordable, he thought; the second, dangerous.

“I was afraid to get quarantined and not getting proper medical care,” the 20-year-old said, referring to the Syrian government-run facilities where COVID-19 patients are being sent.

Instead, Ahmed confined himself to his room, sought medical advice on Facebook and consulted over the phone with a local doctor. Neither he nor anyone he had been in contact with was tested. “I couldn’t afford it,” he told Al Jazeera by phone, explaining it would have cost him 126,000 Syrian pounds ($246), more than his monthly salary.

Ahmed’s presumed coronavirus infection in late July is believed to be among the thousands of cases going undetected across Syria’s government-held areas. Official data put the number of confirmed COVID-19 infections at 4,366, with 205 related deaths, but several doctors, residents and health experts who spoke to Al Jazeera from inside and outside the war-torn country said these figures do not reflect the true extent of the coronavirus outbreak.

“There is a huge gap between the actual number [of cases and deaths] and the one announced by the government due to its lack of resources and capacity to receive patients, but also because it wants to mitigate any unexpected impact of the pandemic, like social unrest,” Zaki Mehchy, a London-based senior consulting fellow at Chatham House and co-founder of the Syrian Center for Policy Research, told Al Jazeera.

With a collapsed healthcare system, a battered economy and a severe lack of doctors and nurses due to medical providers fleeing Syria’s brutal war, authorities face an uphill battle to control the spread of COVID-19.

Chronic shortages of medical equipment and supplies – along with poor conditions at quarantine facilities, the need to earn a living and deep distrust towards state institutions after more than nine years of conflict – have all resulted in many suspected patients not reporting symptoms associated with the respiratory disease.

To fill in the gaps, coronavirus-related Facebook groups where doctors offer medical advice have sprung up online – as has happened with businesses renting oxygen tanks to patients for home use.

“People prefer to die rather than coming to the hospital,” Moustafa*, a doctor working in a hospital in Damascus, told Al Jazeera on the phone.

He said he is often contacted by people asking for medical advice but cannot afford any protective gear to visit them in person. A high-quality mask that should be changed daily costs about 5,000 Syrian pounds ($10).

The Syrian economy has been in free fall in recent months, buckling under the weight of the country’s long-running conflict and the impact of a dollar-liquidity crisis next door in Lebanon. The financial turmoil has been compounded by a steep drop in the value of the Syrian pound, which has made life even harder for millions of long-suffering Syrians who survive on daily wages.

With more than 80 percent of the population living below the poverty line, the increase in the price of basic goods prompted sporadic protests over Syria’s summer as a new wave of United States sanctions heaped further pressure on the crippled economy.

“The economic sanctions which are coercive and unfair have been impeding the capacities of many essential services, in particular healthcare services,” Syrian Minister of Health Nizar Yazigi told a virtual meeting of the World Health Organization (WHO) in May, referring to the punitive economic measures imposed by Western countries.

Faced with a deteriorating economic outlook, the government moved too slowly in imposing coronavirus containment measures, critics say – and too quickly in scrapping them. In May, despite an uptick in infections a month after businesses and public markets were allowed to reopen, authorities lifted a two-month night-time curfew and permitted movement between government-held provinces. Mosques also reopened the same month, while students returned to classrooms on September 13. 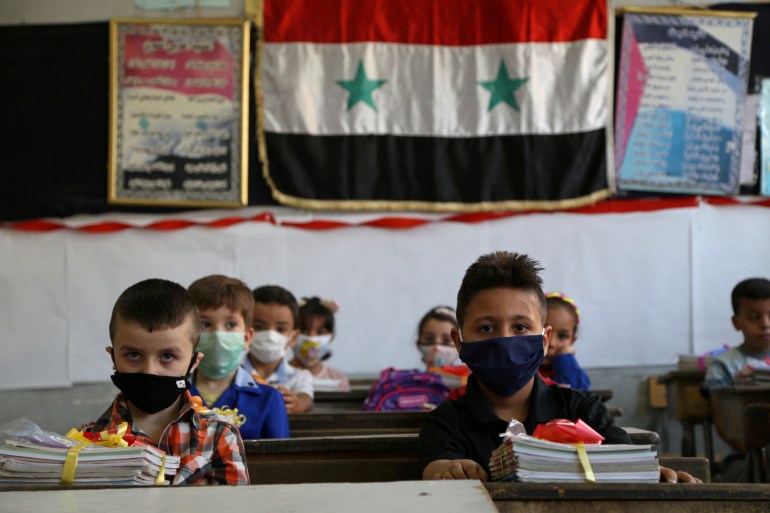 Students wearing protective face masks sit in a classroom as the school year kicks off amid concerns about the spread of the coronavirus disease, in Damascus, Syria [File: Yamam Al Shaar/Reuters]“The health ministry is taking only formalities, no [real] measures were adopted [to curb the spread of coronavirus], especially now,” said Jamal*, another doctor at a Damascus clinic, echoing similar calls of concern following a reported spike in the number of coronavirus cases and fatalities in August.

While it is extremely hard to establish exact data over the scale of the outbreak, a group of researchers from Imperial College London last month warned that only an estimated 1.25 percent of COVID-19 deaths were reported in Damascus, with as many as 4,380 fatalities feared undetected as of September 2.

“Given that Damascus is likely to have the most robust surveillance in Syria, these findings suggest that other regions of the country could have experienced similar or worse mortality rates due to COVID-19,” the researchers said.

In the city of Aleppo, the impoverished family of a man in his 60s who in August fell ill with coronavirus hesitantly decided to take him to Aleppo University Hospital. “No one trusts hospitals in Aleppo; everybody knows that if a coronavirus patient gets in, he or she won’t make it,” Khalil*, the man’s nephew, said.

Once at the overcrowded facility, Khalil said a paramedic told his cousin: “You have to wait if one of the [other] patients dies, only in this case your father would be admitted.” Two days later, the man died at home.

Meanwhile, under-resourced medical professionals say they have to perform their duties under the watchful eye of the powerful security services roaming state-run healthcare facilities.

This, some say, acts as a further deterrent for patients already reluctant to seek treatment in a country where fear of the state apparatus runs high and any critical discussions about the handling of the pandemic could be seen as a threat to a government determined to convey a message of control.

“The hospital is like a prison: you can see people from the intelligence, they check everything you do and say,” Moustafa said. “We have to hide everything, not to talk about anything [related to COVID-19].”

Jamal said, “Patients arrive at the hospital on their last breath”.

“Those cases need equipment that hospitals don’t have, and people know it,” he added over the phone, noting that the government does not have the resources to implement preventive measures and can neither treat nor test patients.

‘A million other reasons to die’

In a bid to help address the crisis in the government-controlled areas, the WHO has set up five testing facilities – in the capital, rural Damascus, Aleppo, Homs and Latakia – carrying out up to 1,000 coronavirus tests per day.

But that is not enough, according to Akjemal Magtymova, the WHO’s Syria representative.

“Even if I could detect tens of thousands of more cases, what do I do if we don’t have the resources to cure them?” Magtymova asked, her voice imbued with a tone of exasperation.

According to the global health agency, only half of the country’s 113 public hospitals were fully operational by the end of June. There are fewer than three beds available for every 10,000 people – three times less than international standards.

But what is even more alarming for Magtymova is the shortage of medical professionals. According to a United Nations report published in March, a staggering 70 percent of them have left the country since the start of the war in 2011.

“One of my biggest concerns is that we are working with a very limited number of healthcare workers, which are at a high risk of infection,” she told Al Jazeera.

“We are expecting a new wave – we have to check those children going back [from school] to their extended family,” said Magtymova, stressing that while the rate of transmission is not as high as in August, the situation remains “very fragile” amid the deepening economic woes.

“People are starving; 9.3 million are food insecure and depend on a daily wage,” Magtymova said. “Why would they declare to be sick and put themselves in isolation?”

Mustafa concurred: “This is not just about COVID-19, that is the least fear we have. Here, you can die for a million other reasons before COVID-19.”