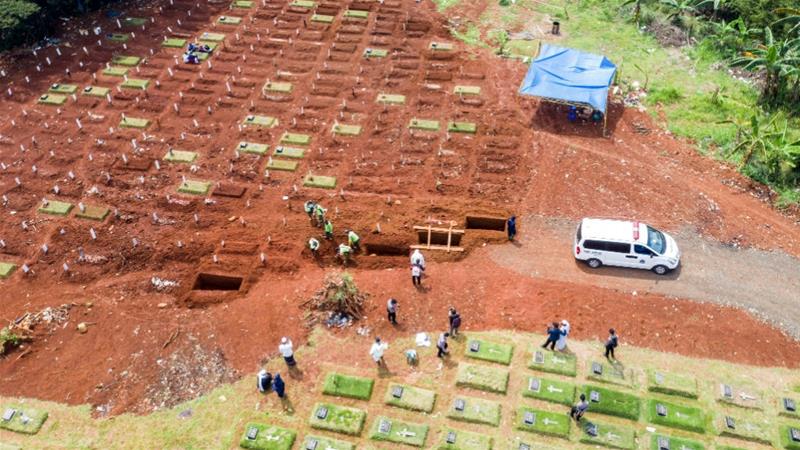 More than 2,200 Indonesians have died with acute symptoms of COVID-19 but were not recorded as victims of the disease, a Reuters review of data from 16 of the country’s 34 provinces showed.

Three medical experts said the figures indicated the national death toll was likely to be much higher than the official figure of 765.

Indonesia has one of the lowest testing rates in the world, and some epidemiologists say that has made it harder to get an accurate picture of the extent of infections in the world’s fourth-most populous country.

The most current data from the 16 provinces shows there were 2,212 deaths of patients under supervision because they had acute coronavirus symptoms. Indonesia’s health ministry uses the acronym PDP to classify these patients when there is no other clinical explanation for their symptoms.

The data is collated by provincial agencies daily or weekly from figures supplied by hospitals, clinics and officials overseeing burials. It was obtained by Reuters by checking websites, talking to provincial officials and reviewing World Health Organization (WHO) reports.

The 2,212 deaths were in addition to the deaths of 693 people who had tested positive for COVID-19 in those provinces and were officially recorded as victims of the disease.

The 16 provinces account for more than three-quarters of the country’s 260 million population.

A senior member of the government’s COVID-19 taskforce, Wiku Adisasmito, did not dispute the Reuters findings but declined to comment on the number of coronavirus victims he believed were to be found among the patients classified as PDP.

He said many of the 19,897 suspected coronavirus sufferers in Indonesia had not been tested because of the number of specimens awaiting processing at under-staffed laboratories. Some people had died before their sample was analysed, he said.

According to the Ministry of Health’s most recent COVID-19 guidelines, patients classified as PDP are those with acute respiratory illnesses for which there is no clinical explanation other than the new coronavirus.

To be classified as PDP, patients must also have travelled to a country, or an area in Indonesia, where the coronavirus has taken hold within 14 days of becoming sick.

“I believe the vast majority of PDP deaths were caused by COVID-19,” said Pandu Riono, an epidemiologist at the University of Indonesia, citing their COVID-19 symptoms and that there was no other identified cause of death.

Some senior government members played down the risk of an outbreak in January and February with some suggesting that prayer, herbal remedies and hot weather would help ward off the virus. The death toll is now the highest in Asia after China, according to Reuters.

The provincial data follows a report by Reuters this month that burials in the capital Jakarta in March were 40 percent higher than in any month since at least January 2018. The city’s governor told Reuters that coronavirus was the only likely explanation.

Indonesia had officially recorded 9,096 coronavirus infections as of April 27. It has conducted 210 tests per million people. Neighbouring Australia has tested 100 times more per capita, while Vietnam’s testing is about 10 times higher.

“The true infection and death rate are higher than the officially reported data because our tests are still a very low number compared to the population,” said Dr Iwan Ariawan, an epidemiologist from the University of Indonesia.

President Joko Widodo’s government has been accused by activists and his political opponents of lacking transparency around its handling of the outbreak.

The government says it has taken appropriate measures, but Widodo said last month that some information had been withheld from the public to prevent panic.

Widodo said last week he had told his ministers to report COVID-19 data truthfully. His government announced a new transparency initiative two weeks ago, but a promised new website with all the data has yet to be launched.

Daeng Faqih, chairman of the Indonesian Doctors Association, the country’s pre-eminent grouping of doctors, has urged the government to reveal the national number of suspected COVID-19 patients who died but had not been tested.

The WHO representative office in Indonesia also said at the weekend that deaths of suspected coronavirus sufferers should be disclosed.

Adisasmito said the government was not hiding data and that he was unaware the WHO had called for suspected COVID-19 death statistics to be made public.

On Tuesday, the WHO declined to offer any comment beyond its weekend advice, made in its latest situation report on Indonesia.