Mr Conte also warned he would refuse to sign off on the deal at the European Council until there were what he described as “adequate measures” on the table – likely a reference to so-called coronavirus bonds which would make all members of the EU27 jointly responsible for debts racked up in public spending. The 55-year-old reacted angrily after northern European nations, particularly the Netherlands, voiced their steadfast opposition to the idea of eurobonds, nicknamed coronabonds, which have been pushed by Italy as a solution. Describing the 500 billion euro deal which the ministers unveiled last night, Mr Conte said it was “still insufficient”. 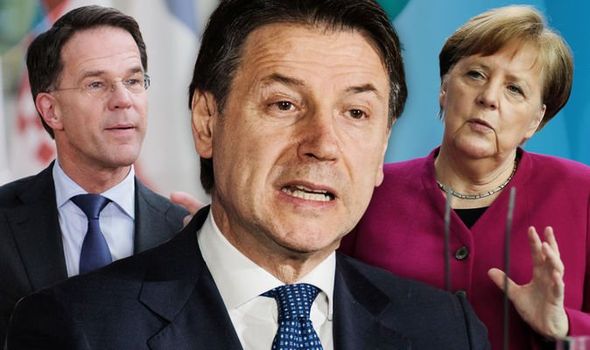 He emphasised his belief that coronabonds represented the best way to approach an economic response to the pandemic and vowed to continue fighting for their introduction.

He also pointed out the eurogroup had only made proposals on the European Stability Mechanism and that nothing had yet been signed.

Furthermore, he said he would not sign any on an economic response until he deemed the proposals to be “adequate”.

Mr Conte also told the news conference the government was extending the nationwide lockdown to contain the coronavirus until May 3, though a few types of shops would be allowed to re-open from April 14.

He said: “This is a difficult but necessary decision for which I take all political responsibility.”

Draconian curbs on movement and the shutdown imposed on most shops and businesses across Italy were imposed on March 9, and were scheduled to expire on Monday.

Among a few exceptions to the lockdown extension, Conte said bookshops, stationers and shops selling children’s clothes could reopen from April 14.