To understand how deeply tamal culture runs through California, you have to know why Enrique Zaragoza and his cellmates collected bags of Chili Cheese Fritos from the Centinela State Prison commissary.

Crushed into a soft, umami-rich powder, then hydrated to form a grainy mash, the chips stood in for masa. Using a piece of plastic, the men pressed and rolled it around a snack pack of Cheddar and Chata-brand chilorio, building makeshift, contraband pork tamales to mark holidays in their cells.

“It was something to look forward to,” said Mr. Zaragoza, who is no longer incarcerated, and recently ground corn by hand to make tamales at home. “It was the food that made us come back to ourselves.”

The Mesoamerican dumpling, made with nixtamalized corn dough and a variety of fillings, has been around for thousands of years. Called tamalli in Nahuatl, a language spoken by Indigenous peoples in southern Mexico and Central America, it’s still referred to in its singular as a tamal, or tamale.

It can be a source of deliciousness, comfort, cultural connection or income, but the tamal is not a monolith, and there’s no single, correct way to make it.

This is most tangible around the holidays, when cooks take orders for their specialties on Instagram, restaurants post handwritten signs for limited runs, and women lug coolers through the streets, parking by grocery store counters, outside church stoops and next to bus stops. 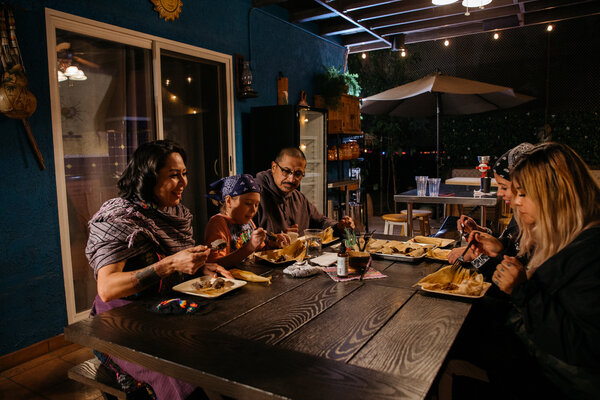 The full splendor of tamal season involves all kinds of irrefutable, family-specific traditions, one-of-a-kind experiments and regional variations, from Mexico and Guatemala to Venezuela and Puerto Rico, where a brilliant range of tamal-like parcels go by other names — pasteles, hallacas, humitas.

At the end of a difficult year, both the microeconomies and joys that these tamales provide have become especially vital. So the city’s tamaleras press on.

“We take it for granted in Los Angeles, but to have access to all these different kinds of handmade tamales, it’s everything,” said Claudia Serrato, a teacher and cook. She usually hosts tamaladas throughout December at her home in Montebello, inviting everyone to take turns on the creaky, metal grinder, milling nixtamal into a fresh, intensely sweet-smelling flour called masa harina.

Many cooks buy the flour, then season and knead it to make their dough. Others buy the ready, seasoned dough — masa preparada — at grocery stores and shops, or from their favorite tamaleras, who often sell their own carefully calibrated mixes by the pound.

But Ms. Serrato likes to make it all herself. She soaks whole kernels with slaked lime, known as cal, overnight. The next day, she grinds the swollen kernels and kneads the flour with stock and whipped, shiny vegetable shortening to make a dough. The masa is a large, heavy mass, and preparing it requires time and muscle.

“I know some people see it as a tedious task,” said Ms. Serrato, who’s interested in native ingredients and the Indigenous foodways that predate colonization of the Americas. “But for me, this is about family and cultura. It’s what brings us together.”

At one of Ms. Serrato’s tamaladas, you might catch up with more than a dozen friends and family over drinks, all the while learning how to feel for when the raw masa is hydrated so it’s exactly the right kind of sticky, to spread it evenly across the wrapper and to leave a certain amount of space on the corn husk, so the tamal folds neatly and evenly.

You might learn more about who your auntie is dating, but also how to check if a tamal is cooked through, to note how the perfectly cooked masa peels away from the husk, bearing the imprint of its fine ridges.

Knowledge is preserved and passed on in this vital intergenerational space — grandmothers teaching grandsons, cousins correcting each other, friends sharing their own families’ tips and tricks.

The cancellation of so many large, annual tamaladas this year has been necessary, but grim, in part because the tamal itself is an act of preservation, and the spirit of making and eating tamales is communal and cooperative.

For Ms. Serrato, it is even devotional. The slow process of making tamales, which begins with buying the corn, traces a line back to her Purépecha and Huastec ancestors in Mexico, who likely made plant- and insect-based fillings for their corn parcels, decorating them with seeds, leaves and flowers, and serving them at pre-Columbian feasts.

“Their trade routes went all the way up to Minnesota,” Ms. Serrato said, explaining why she works with a variety of native North American ingredients. “So ingredients like wild amaranth and bison would have also met the tamal.”

To make a small batch of her blue corn and bison tamales this year, Ms. Serrato bought meat from a local rancher, and braised it until it pulled apart with the gentle nudge of a fork.

She dressed the meat in a dark, smoky salsa of puréed red chiles, onion and garlic, and wrapped the tamales with her sister and sister-in-law, sitting at a table in her outdoor kitchen. It was a smaller scene than in years before, but the women still lit sage, drank tequila and danced.

Right out of the pot, Ms. Serrato’s tamales were the color of wet stone, porous, tender and springy. Inside, the threads of meat were pleasingly wild and gamy, bright with chile rojo. The tamal, rushing with a perfumed steam, tasted almost alive.

“This is it,” said Andrea Serrato, her sister, scraping every bit of masa from the corn husk. “This is the best, best, best you’ve ever made!” They argued briefly over the amount of salt in the masa, and planned to meet the following weekend to make more tamales to sell locally via Instagram, as they do every year.

Karla Vasquez didn’t grow up making tamales at home, but her family always bought tamales de pollo at Christmastime from women in the Salvadoran community who ran small, seasonal businesses in Los Angeles.

“Tamal culture is so prevalent in Latin American countries,” said Ms. Vasquez, who is currently working on a Salvadoran cookbook. “And so many working-class women in my family have relied on those food sales at different times in their lives.”

This year, after thousands of the city’s restaurant workers lost their jobs, many turned to wrapping tamales at home with their families, selling them in the mornings alongside corn-based drinks — unsweetened, porridgelike atole, and sweeter, chocolate-colored champurrado.

Israel Ricardo Luis, a restaurant cook from Oaxaca who was furloughed, now sells the extra-long, banana-wrapped tamales that he and his family make together on the corner of Normandie and West Third Street, and supplements that income working for a delivery service.

Their tamales de mole are smoky and tangy, rich with the fruit of dried chiles. The masa is moist and tender and thoroughly seasoned — worth the mess you make if you can’t wait to get home and start eating them right out of the plastic bag over the steering wheel of your car.

Though the work of making tamales has historically belonged to women, and been passed down through generations of women, men do study and practice the craft.

Alfonso Martinez, who runs the pop-up Poncho’s Tlayudas, makes Oaxacan-style tamales de frijol for special occasions, such as saints’ days and festivals, serving them with a soup made from dried beef ribs, as it would be by Zapotec communities in the Sierra Norte.

The tamal seems simple — a filling of black beans, puréed with onion and garlic — but the wrapping process is intricate.

Sandwiched with fresh avocado leaves, and wrapped in a softened banana leaf, the tamal takes on all of the delicate, herbaceous flavors around it. Though this tamal is vegan, many kinds, across cultures, are bound with animal fats — often lard — girdling meat and cheese.

Chayanne Sarabia, who was born in East Los Angeles and runs Shane’s Tamales, started making vegan tamales for friends and family in 2009, looking to recreate his childhood memories of red pork and green chicken tamales.

He and his mother, Micaela Sarabia, now work together, making about 1,000 tamales in a busy week during the holidays, fulfilling the nonstop orders that come in through Instagram, text messages and over the phone, and delivering them throughout the city with salsas and sides.

Mr. Sarabia cooks mushrooms instead of pork. He replaces chicken with a shredded wheat-and-soy mixture which he marinates, dehydrates and simmers in his mother’s green chile for a gently bouncy texture, infused with the tang of tomatillos and garlic.

When he plates a tamal, he unwraps it most of the way, so its chubby shape is revealed, then serves it open-faced, scattered with thinly sliced, pink pickled onions, a dribble of salsa, seasonal flowers and herbs.

It’s beautiful, and a reminder that the tamal is a special, celebratory, valuable food that has never stopped evolving.

“Yes, you can buy a tamal on the street for two bucks, but it’s not street food,” said Ms. Serrato. “It’s a portal, it’s a storyteller, it’s a carrier of ancestral memory, and it’s gone through a lot of hands.”