Joan of Arc was believed to have been 19 years old when she was condemned to death for heresy in 1431 and subsequently burned at the stake. The teenager was considered a witch at the time of her trial, after she claimed to have acted upon voices and visions of religious figures. While many myths surround her life, including the belief that she suffered a fatal arrow wound during battle but continued to fight, it’s claimed she aided in the war efforts. Many attribute her impact as having raised morale during the Hundred Years’ War, where she fought to instate Charles VII as the King of France. While her role during combat remains largely debated, many will forever remember her horrific end based upon her unquestioned faith – which led to her being canonised as a Catholic saint 490 years after her death. Years later, experts have reexamined her case using modern scientific technology and claim they may be able to explain her shocking final moments.

Joan of Arc’s demise came after she was captured by a group of French rebels, who were aligned with the English and handed her over to be put on trial for heresy.

After she was found guilty, she momentarily retracted her statement and denied having ever heard voices or seen visions, in what scholars described as her crisis of faith.

Dr Rachel Gibbons, a lecturer at the University of Bristol, said: “She’s a saint, she’s a knight, shes a heretic, she’s a witch, she’s a feminist champion, she a prophet.

“It may well be that she was afraid which seems to be a perfectly normal human reaction from anybody let alone a 19-year-old girl.

“If she had been found not guilty of heresy, if she had not gone back on her [claims of religious experiences] it’s unlikely we would have ever heard of her.

“Dying as she did, making that sacrifice of herself for what she believed, is what brought Joan of Arc to prominence.”

Dr Miguel Farias, from Oxford University Dept of Experimental Psychology, told a 2010 episode of ‘Mystery Files’, now on Amazon Prime, that contrary to beliefs of the time she was not mad.

He claimed there is a difference between those who “hear voices” and those that “have serious psychological conditions” as many with the former can “have normal lives”. 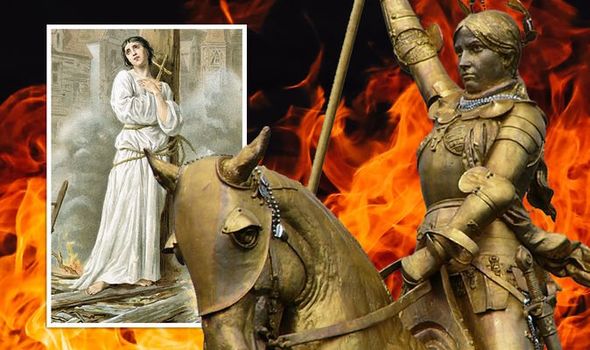 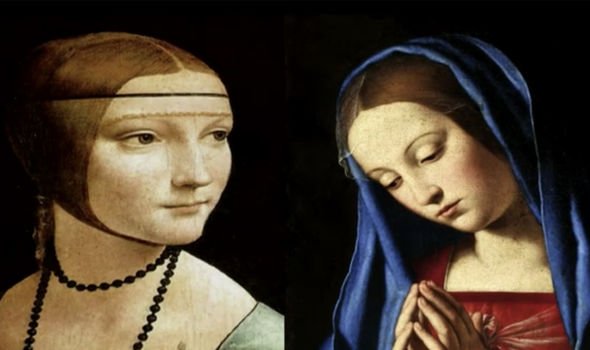 On her decision to withdraw her statement, Dr Farias added: “She’s going to be burned alive, it’s impossible not to be frightened of that.

“It’s that moment of weakness, which in the Christian tradition makes her become a saint – she was weak at a certain point and she managed to accept that weakness and overcome it.”

Citing accounts from her death, he claimed that she did not scream while she was burned to death – as legend also proclaims – and instead continued to firmly state the name “Jesus”.

He claims her religious beliefs and a meditative state could have dampened some of the agony she would have likely experienced.

Dr Farias said: “We have the evidence from Eastern traditions that people in a highly focused state of mind did not express any pain.

“They seem to cut off this sort of external simulation, so we know it’s possible it’s quite extraordinary.” 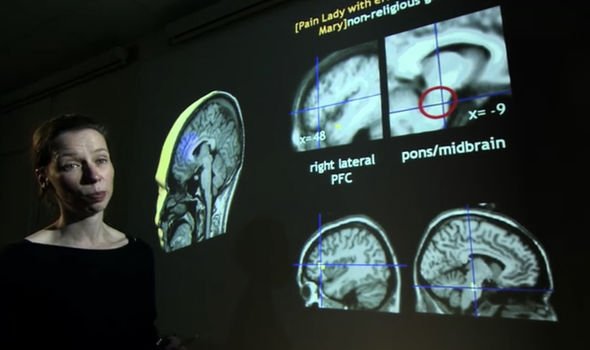 In a smaller experiment to demonstrate how pain could be reduced by religious beliefs and concentration, they gave 12 Atheists and 12 Catholics electric shocks to test how they interpreted the pain.

They were asked to rate the intensity of the shock, while their brains were scanned for unusual activity in an MRI machine.

During the test, Dr Farias and Dr Katja Wiech, from Oxford University’s Department of Clinical Neurology, showed participants two paintings as they electrocuted them.

One of the pieces showed the Virgin Mary and the other Leonardo da Vinci’s Lady with an Ermine.

After the experiment, Dr Wiech concluded: “The first thing we notice is that the religious participants really experienced less pain – but only when they looked at the image of the Virgin Mary.”

She claimed that those who had faith were able to “access a region [in the brain] that helped to dampen down the pain”.

While they did not profess to know how the pain of being burned alive could differ to the electric shocks, they suggested that Joan of Arc’s religious beliefs may have reduced her pain.

Dr Wiech said: “She found the strength in her belief to suppress the pain at a physical level – it might have suggested what went through her brain.”