The moves comes as lawmakers in the US and on this side of the pond criticised Mr Biden’s slow reaction to the latest round of fighting between Hamas and the Israeli Defence Forces (IDF).  Earlier this week the Democrat called for a ceasefire but did not include a timeline. The White House said Mr Biden made his demand during a conversation with Mr Netanyahu on Wednesday morning.

It was the fourth time the two men spoke on the phone in the past week.

White House spokeswoman Karine Jean-Pierre told reporters: “The two leaders had a detailed discussion on the state of events in Gaza, Israel’s progress in degrading the capabilities of Hamas and other terrorist elements, and ongoing diplomatic efforts by regional governments and the United States.

“The president conveyed to the prime minister that he expected a significant de-escalation today on the path to a ceasefire.”

Their chat came as the deadly violence between Israel and the Palestinians reached a 10th day. 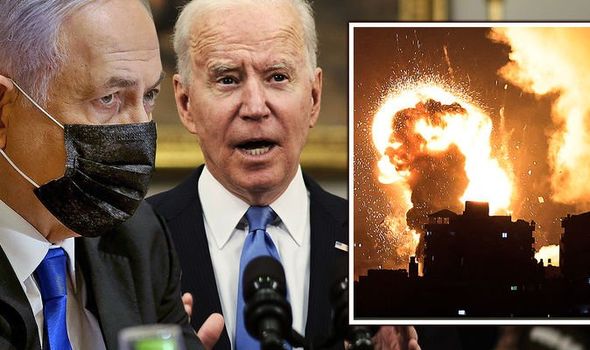 The bolstering of support from Hossein Salami, the commander-in-chief of the branch of the Iranian armed forces, comes as international condemnations mounts on Israel over the number of children killed in airstrikes in Gaza.

Earlier today, Mr Netanyahu told a briefing of foreign ambassadors that he would not give the IDF a time frame in which to continue their assault agains Hamas militants in the Gaza Strip.

He said: “We don’t stand with a timer. We want to achieve the goals of the operation.

“Previous operations lasted a long time so it is not possible to set a time frame on the operation.”

Mr Biden’s decision to pile pressure on the Israelis to end their assault comes after House Speaker Nancy Pelosi on Tuesday called for a ceasefire.

The Democrat said “there must be a serious effort on the part of both parties to end the violence” while also affirming Israel’s right to defend itself.

Mr Biden said on Tuesday that American officials were engaging with the Egyptians and other regional partners to bring about an end to the violence.