A staffer for Democratic vice presidential candidate Kamala Harris tested positive for COVID-19 on Wednesday, the Joe Biden campaign said, adding that neither Biden nor Harris had close contact with her before their positive tests.

“Senator Harris was not in close contact, as defined by the CDC, with either of these individuals during the two days prior to their positive tests; as such, there is no requirement for quarantine,” Biden campaign manager Jen O’Malley Dillon said in a statement.

“Regardless, out of an abundance of caution and in line with our campaign’s commitment to the highest levels of precaution, we are canceling Senator Harris’s travel through Sunday, October 18th, but she will keep a robust and aggressive schedule of virtual campaign activities to reach voters all across the country during this time. She will return to in-person campaigning on Monday, October 19th.”

Harris had been scheduled to travel Thursday to North Carolina and to Ohio on Friday.

The two individuals who tested positive did fly with Harris on October 8, the day Harris and Biden spent several hours together in Arizona through multiple campaign stops, private meetings and a joint appearance in front of reporters at an airport. 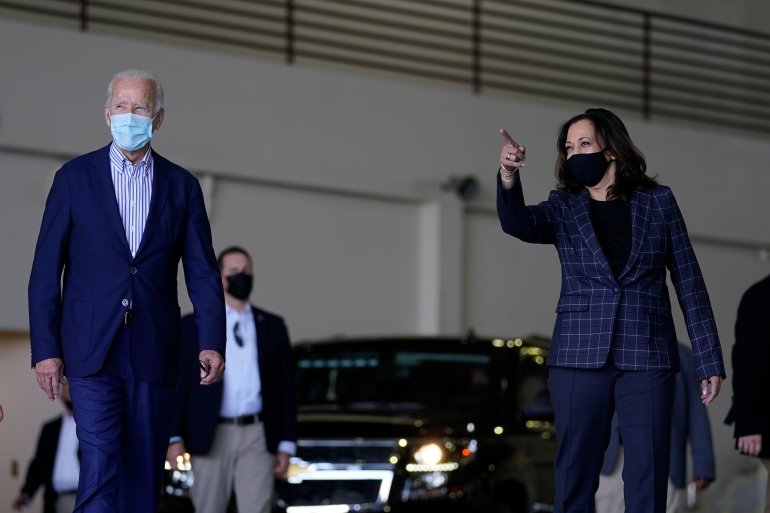 Democratic presidential candidate Joe Biden and vice presidential candidate Kamala Harris at Phoenix Sky Harbor International Airport, in Phoenix, Arizona, October 8, 2020. [Carolyn Kaster/AP]They were masked in public, and aides said they were masked in private, as well. Biden and Harris have each had multiple negative tests since then. Harris has had two tests since October 8, most recently Wednesday, O’Malley Dillon said. Biden’s last announced negative test was Tuesday.