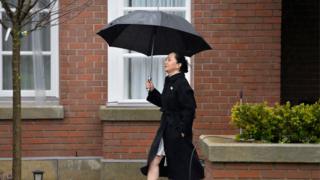 A Canadian court is set to issue a key judgment in the case of a senior Huawei executive fighting extradition to the United States.

Meng Wanzhou will learn whether her case meets the threshold of double criminality – meaning the charges would be crimes in both the US and Canada.

Her case has created a rift between China and Canada.

Beijing has warned of further harm to Canada-China relations unless Ms Meng is released.

The US wants Ms Meng to stand trial on charges including fraud linked to the alleged violation of US sanctions against Iran.

Ms Meng, who was arrested in late 2018 in Canada, denies any wrongdoing, as does Huawei.

The first phase of her extradition hearings, focusing on double criminality, was heard in January in British Columbia’s Supreme Court in Vancouver.

At the time, her lead defence lawyer, Richard Peck, argued in court that Canada is effectively being asked “to enforce US sanctions”.

If the judgement rejects claims of double criminality in the case it could lead to Ms Meng’s release, though the federal justice department could also appeal.

China has repeatedly called for Ms Meng to be released, and on Tuesday Beijing reiterated those calls and warned of a possible further diplomatic rift.

A Chinese foreign ministry spokesman said that Canada “should immediately correct its mistake, release Ms Meng and ensure her safe return to China at an early date so as to avoid any continuous harm to China-Canada relations”.

Lawyer Nick Vamos, former head of extradition at the crown prosecution service in the UK, told the BBC that the case is being closely watched because of the “geopolitics” involved.

While the decision may hinge on technical legal arguments, “which may leave a lot of people cold”, many will focus on what the case will mean for US, Canada and China relations, as well as what it means for Chinese telecom giant Huawei.

What is the background?

Ms Meng is the chief financial officer of Huawei and the daughter of its founder Ren Zhengfei.

She has been out on bail but under house arrest in Vancouver, where she owns property, since shortly after she was detained in December 2018.

Not long after her arrest, China detained two Canadian nationals – Michael Kovrig, a former diplomat, and Michael Spavor, a businessman – and has accused the pair of espionage.

The move by Beijing is widely viewed as “hostage diplomacy” – a tactic to put pressure on Canada to release the Huawei executive.

Ms Meng’s arrest also led to a trade row between Canada and China.

China says the case is political persecution by the US.

Washington has been lobbying its allies – including the UK – to not use Huawei’s 5G technology services in critical communications infrastructure, alleging it could be a security threat.

What is next in the case?

A second hearing, focusing on allegations of abuse of process and whether Canadian officials followed the law while arresting Ms Meng, is currently scheduled for next month.

Even if a Canadian court eventually recommends extradition, it is the federal justice minister who makes the ultimate decision.

It is highly likely the overall process could be lengthy. Ms Meng has avenues to appeal throughout the process and some extradition cases have dragged on for years.