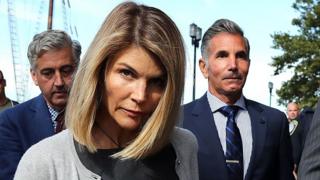 US actress Lori Loughlin, star of the sitcom Full House, has been sentenced to two months in prison for her part in a US college admissions scam.

A federal judge accepted a plea deal before sentencing the star.

Her husband, Mossimo Giannulli, was handed a five-month prison term.

In May, the couple admitted to taking part in a fraud scheme designed to ensure spots for their daughters at the University of Southern California as fake athletic recruits.

Fashion designer Giannulli must pay a $250,000 fine and complete 250 hours of community service.

“I made an awful decision,” Loughlin said via video link.

“I went along with a plan to give my daughters an unfair advantage in the college admissions process, and in doing so, I ignored my intuition and allowed myself to be swayed from my moral compass.”

What was the fraud scheme?

The pair are among 50 people charged in an alleged criminal enterprise to get their children into top US universities.

The couple had initially pleaded not guilty to the fraud charges.

Prosecutors said Loughlin and Giannulli paid $500,000 (£408,000) in bribes to have their two daughters admitted into the University of Southern California (USC) as fake rowing-team recruits.

The couple are among the most high-profile suspects to be caught up in the national cheating scandal.

Desperate Housewives actress Felicity Huffman was also charged and pleaded guilty within one month. She ultimately served 11 days of a two-week sentence in a San Francisco-area prison.

Prosecutors in Massachusetts had publicly warned Loughlin that the longer her case dragged on, the longer her sentence would be if she was eventually convicted at trial rather than entering a guilty plea.