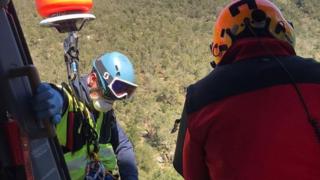 A man has been rescued by helicopter from the Pyrenees after trying to walk from France to Spain to buy cheap cigarettes, reports say.

The local mountain rescue service said the man was found “exhausted, shivering, cold and lost” when he was eventually picked up.

“We remind you once more. STAY AT HOME,” the regional police tweeted.

The mountain rescue service said the man, from Perpignan – about 25km (15 miles) from the Spanish border – had initially set off by car but was turned back at a checkpoint.

It said he then decided to attempt the journey on foot along a hiking path over the mountains.

However, the man fell into a stream and brambles and got lost before contacting rescuers, the service said. It said he was found quickly and airlifted to a security facility back in Perpignan.

Under lockdown rules in France, people can only leave home for exceptional reasons and with a letter explaining why.