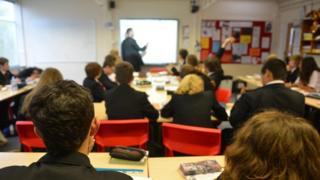 Teachers on the Isle of Man have voted to continue industrial action in a dispute over pay.

National Association of Schoolmasters Union of Women Teachers (NASUWT) members voted 85% in favour of walking out and 94% for action short of strike.

Education Minister Alex Allinson said the decision would “lead to further stress and anxiety” for pupils.

The NASUWT said it would consult members on the “next phase” but action short of strike would continue in the meantime, which would mean refusing to do administrative tasks such as attending meetings.

Mr Allinson said it came at a time when hundreds of pupils were about to receive their grades and education had been “heavily impacted” due to the coronavirus pandemic.

Members of the NASUWT were previously balloted in December and a decision to repeat the process was announced by the union last month.

A significant pay raise was announced on 22 June by the education minister with an increase of 5.5% for new starters and 2.75% for other educators.

But Mr Roach said teachers had “faced the erosion of their pay” and the increase would do “little to address this erosion, which is jeopardising the recruitment and retention of teachers”.

The dispute began in 2018 after a recommendation of an across-the-board 3.5% pay rise by the STRB was not implemented in full.