The Met Office has issued three weather warnings for snow as temperatures have plummeted across the country. Scotland is expecting to face seven inches of snow across the west coast, the highlands, and parts of the central belt over the next two days.

The weather warning reads: “Frequent showers will increasingly turn to snow Wednesday night and persist into Thursday morning though these likely to fall as sleet and hail at times, mainly around coasts.

“Northwest Scotland looks most exposed to these showers with 2 cm of snow accumulating by Thursday morning in places even to low levels.

“Larger accumulations are expected at higher elevations with 2-5 cm above 200 m and up to 10 cm over some of the highest routes.

“Whilst the Southern Uplands is likely to see some snow over higher ground the likelihood is that only very small accumulations are expected here below 200 m. 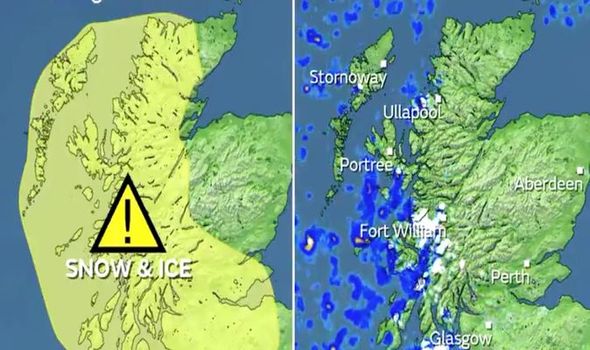