The Met Office warnings are in place for four days, from Wednesday, December 16 until Saturday, December 19. Warnings for wind have been issued for Wednesday, while the rest of the week will see torrential downpours. Parts of Wales, south-west England, and Northern Ireland will be affected by the vicious weather patterns coming in.

The Met Office warning for wind on Wednesday reads: “An area of strong wind is expected to affect western parts of the UK on Wednesday.

“Wind gusts of 55 to 60mph are likely for the far southwest of England and the east of Northern Ireland.

“The strongest winds will affect Cornwall before transferring to part of eastern Northern Ireland later as winds ease from the southwest.

“A band of squally rain will move across the area through the period and may also prove an additional hazard.” 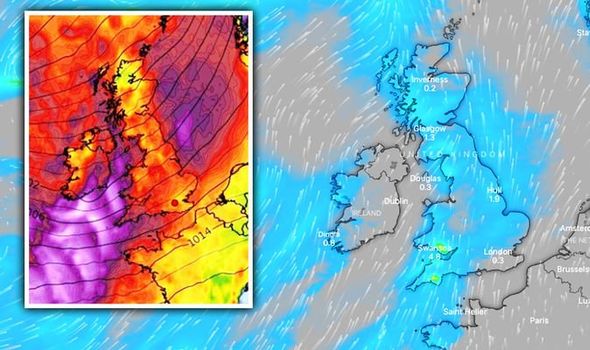 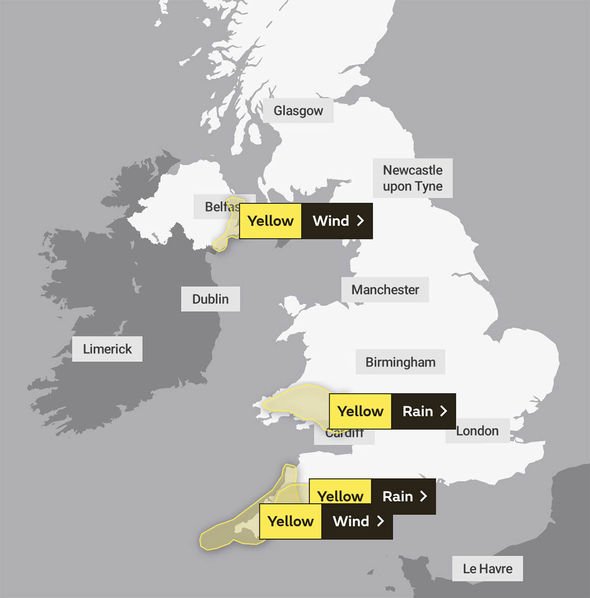 The warning for rain on Thursday through to Saturday reads: “Outbreaks of rain are likely to spread across these areas later Thursday, with further spells of, at times, heavy rain then following through Friday, before clearing to the east early Saturday.

“Many areas are expected to see 20 to 30mm, with Dartmoor and higher ground of South Wales likely to see some 50 to 60mm.

“After wet weather on preceding days, some flooding is likely, this in turn affecting transport and travel.”

The Met Office also warns flooding of a few homes and businesses is likely, while spray and flooding on roads will undoubtedly extend journey times. 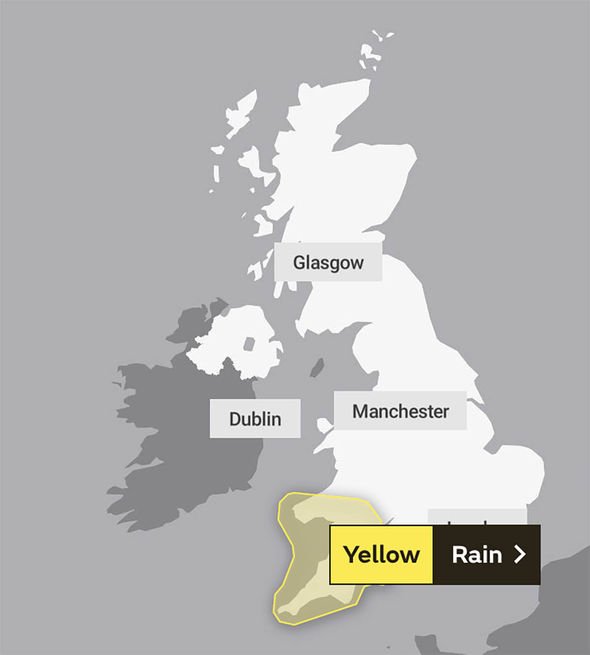 Thursday’s warning is in place from 9pm until 3am on Saturday.

There is also expected to be some interruption to power supplies and other services, with some homes seeing electricity go out.

Met Office forecaster Alex Deakin said: “The winds are going to strengthen [on Wednesday] and could really be quite lively.

“Coupled with some big tides, it could bring some coastal issues with potential for coastal flooding in the far south west of England and the east coast of Northern Ireland.

“There will be gusts of 50 to 60mph and problems for high sided vehicles.

“Wet and windy weather swings its way into Scotland and Northern Ireland and right across Wales for much of Wednesday too.

“Most of the east of England won’t see that rain until Wednesday night.

“It’s going to be blustery and gusty making it feel cooler than temperatures would suggest.”