The Met Office has issued widespread weather warnings today (Tuesday, August 25) until Wednesday morning. Storm Francis is the latest named storm of the season, and the Met Office is warning up to 70mph winds could be possible in some areas of the UK today and into tomorrow.

The Met Office has upgraded one of its existing yellow rain warnings, which has been in place from midnight on Tuesday.

The Met Office explained: “The warning has been extended into parts of Derbyshire for high totals over the Peak District.”

The yellow rain warning expires at 6am on Wednesday, and covers much of northern England, Wales and now a part of the East Midlands.

Another yellow rain warning is in place for Northern Ireland and a swathe of Scotland, which is also due to expire at 6am on Wednesday. 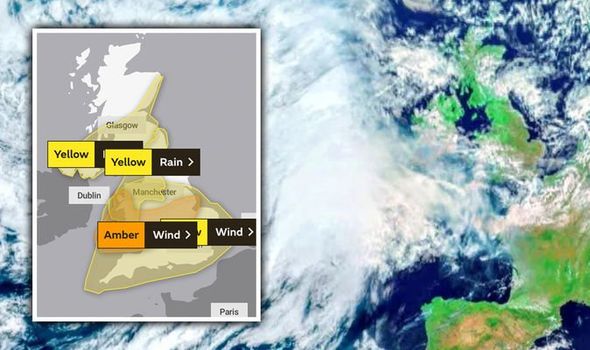 As much as 60-90mm of rainfall is forecast for parts of Northern Ireland and southern and eastern Scotland.

The warning reads: “Heavy rain is expected during Tuesday and early Wednesday and is expected to result in some flooding and disruption to travel.”

The Met Office warn of disruption to road, bus and train networks, and the flooding of some homes and businesses is likely.

The Met Office also warn there may likely be some disruption to power supplies and services.

Most of England and Wales is included under a yellow wind warning until 9am on Wednesday.

“Gusts are likely to reach 55-60 mph for quite a few places, with exposed coasts and hills seeing gusts of around 70 mph.

“Whilst not exceptional, winds this strong are unusual for August and they will be accompanied by some heavy rain in places, with possible transport disruption and impacts on outdoor activities.”

Storm Francis is the latest storm to be named by the Met Office, following Storm Ellen’s arrival earlier this month.

Storm Francis is a deep area of low pressure, forecast will cross the UK from Monday night.

Met Office chief meteorologist, Andy Page, said: “The UK is in for another unseasonably wet and windy spell with Storm Francis arriving on Tuesday.

“There will be strong winds and heavy rain, especially in the west of the UK.

“A number of severe weather warnings have been issued and these warnings can be updated regularly so please keep up to date with the latest Met Office forecast.”

Storm Francis is forecast to clear to the east of the UK by Wednesday lunchtime.

For the rest of Wednesday, the Met Office forecast a brighter and more settled outlook.

The Met Office also forecast a rainy day on Friday, but the bank holiday weekend should bring sunshine to most parts for a time with scattered showers.

Further unsettled weather is expected to move in from next week on Tuesday.