Relatives gathered at the scene in Mexico City, seeking news of survivors and victims who included children. A train had plunged from an overhead line in the city’s metro system and ploughed into a busy road, colliding with traffic. Mexico’s president has promised a full inquiry into the disaster. Andres Manuel Lopez Obrador vowed “nothing would be hidden”. Witnesses described seeing clouds of dust and sparks from Monday night’s crash.

Mayor Claudia Sheinbaum said a girder supporting the track – opened as recently as 2012 – had given way in the minutes before the accident.

City residents had also complained previously of seeing cracks in the metro’s structure following an earthquake four years ago. One survivor told how she and other passengers managed to escape by crawling through a broken window of the mangled railway carriage.

The 26-year-old woman, named only as Mariana, said: “We only heard a loud thunder, and everything fell apart.

“There were many people standing and sitting in the carriage, and when the carriage fell, we went flying and hit our heads on its roof.”

Another eyewitness said: “Suddenly, I saw that the structure was shaking. When the dust cleared we ran to see if we could help. 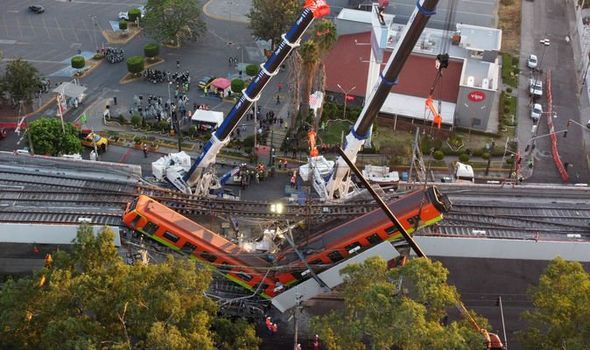 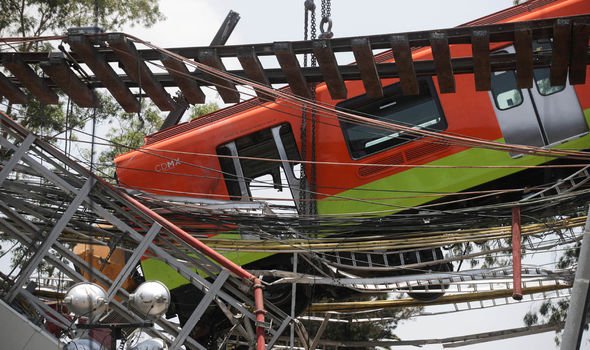 “There were no screams. I don’t know if they were in shock.”

Shortly before midnight on Monday, two carriages could be seen hanging in mid-air and a crane had to be sent to stabilise them before rescue attempts could continue.

At least one person was pulled free from the wreckage of their car after it was trapped beneath the body of the train.

The metro system serves about 1.5 billion people a year.