Michelle Obama, 56, launched a blistering attack on President Donald Trump on Monday and urged Americans to elect Democrat Joe Biden in November to end the chaos she said had been created during the four years of Trump’s presidency. In an impassioned speech shown on the first night of the Democratic National Convention, Mrs Obama said the Republican Trump “has had enough time to prove that he can do the job” but had failed to meet the moment in a country reeling from the coronavirus pandemic, economic turmoil and racial injustice. But President Trump has hit out at the former First Lady for her pre-recorded interview as he insists he wouldn’t have the job if Barack Obama didn’t do a “bad job”.

President Trump said: “Michelle Obama was over her head and frankly, she should have the made the speech live, which she didn’t do – she taped it.

“And it was not only taped, it was taped a long time ago because she had the wrong deaths.

“She didn’t even mention the vice-presidential candidate in the speech and you know, she gets these fawning reviews.

“If you gave a real review, it wouldn’t be so fawning. 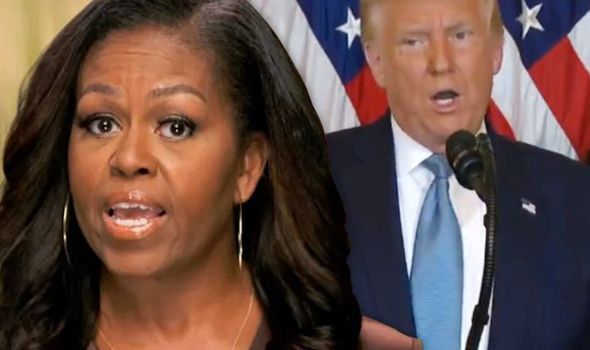 “I thought it was a very divisive speech, extremely divisive and frankly, I wouldn’t even be here if it weren’t for Barack Obama.

“I wouldn’t be in the White House except for Barack Obama because they did a bad job – Biden and Obama.

“If they did a good job, I wouldn’t be here.

“I’d be building buildings someplace and having a good time.”