Seven police officers were injured in clashes with protesters during rallies over the control of a municipal assembly. 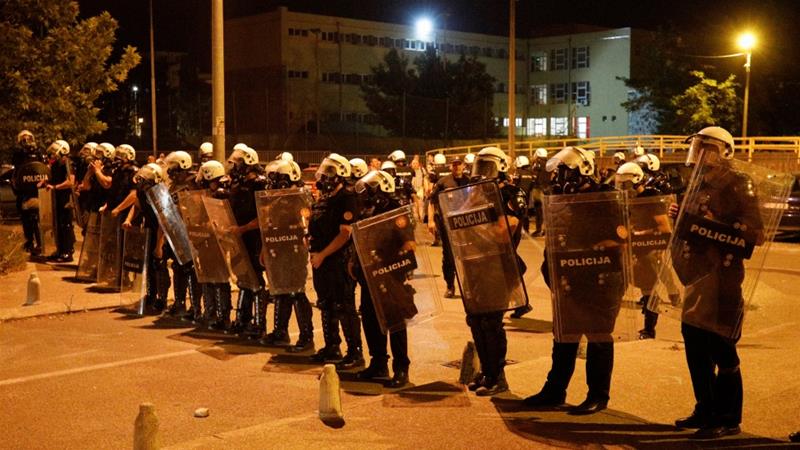 Dozens of people have been arrested in Montenegro after seven police officers were injured in clashes with pro-Serb opposition protesters during rallies over the control of a municipal assembly.

Riot police used tear gas to disperse dozens who rallied in front of the city hall in the Adriatic coastal town of Budva and outside the interior ministry’s headquarters in the capital, Podgorica.

The dispute in Budva began on June 17 when the mayor, who is loyal to the pro-Serb opposition, refused to hand over power to the ruling coalition despite losing his majority in the local assembly.

“If there’s no room for reason, the state will solve this in 15 minutes,” Markovic told the parliament.

Police arrested 17 people in Budva after dispersing the protesters.

Later in the day, hundreds gathered in other towns and started throwing rocks, bottles and other objects at police. At least 50 people were arrested at various locations.

Montenegro’s ruling coalition, led by the Democratic Party of Socialists of President Milo Djukanovic, faces a national election on August 30.

The opposition, which wants closer ties with neighbouring Serbia and Russia, accuses Djukanovic, who has ruled as prime minister or president for nearly 30 years, and his party of corruption, nepotism and ties with organised crime. Djukanovic and his party deny the allegations.

Since December, Montenegro has also been beset by protests by the Serbian Orthodox Church over a law that allows the state to seize some religious property.

Authorities in Podgorica have accused Serbia and Russia, which are closely aligned with the church and the opposition, of undermining Montenegro’s independence.

The Serbian Orthodox Church is the largest Christian denomination in Montenegro, a NATO member and a candidate to join the European Union.