Water cannon were used to disperse peaceful demonstrators in the third day of open rebellion as the hated coup leader made a desperate promise to hold an election. Faced with a general strike, Senior General Min Aung Hlaing made a widely derided TV speech, vowing to hand power to the winner of the poll. He seized control a week ago, detaining leader Aung San Suu Kyi and her government, claiming there had been “huge discrepancies” in her November election victory.

In the capital Nay Pyi Taw yesterday, three lines of police in riot gear stood in the road as protesters chanted anti-coup slogans and told police they should serve the people not the military. But officers placed a sign in the road saying that live ammunition could be used if demonstrators breached the third line of officers.

It was a chilling reminder of the deadly force used by the junta in 1988, when thousands are believed to have been killed during an uprising.

In his first address to the public since the takeover, Gen Aung Hlaing’s 20-minute televised speech was an attempt to distance himself from the bloody past, promising a “true and disciplined democracy”.

But the general’s words drew angry opposition and derision, with images on social media showing people banging pots and pans in protest in front of a TV. In Nay Pyi Taw, one witness said that the authorities had fired water cannon at protesters with “no prior warning”, while “the crowd was peacefully protesting”. 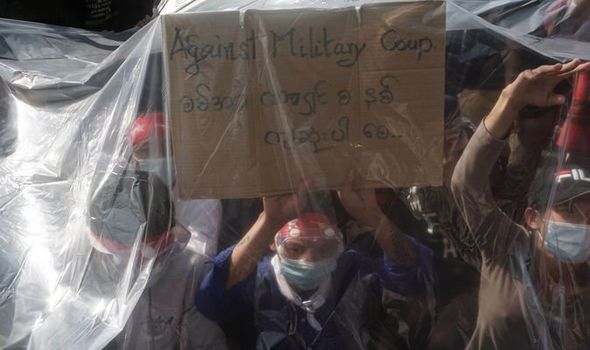 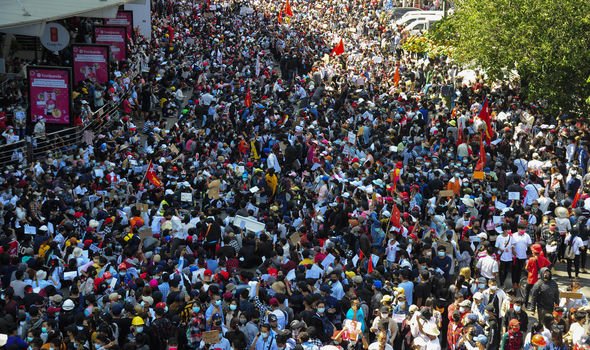 A morning protest in Yangon, Myanmar’s biggest city, swelled rapidly with the crowd exceeding a thousand demonstrators at a major city centre intersection.

Chanting ‘justice for Myanmar’, and raising a three-finger salute, some carried placards saying Reject the Military Coup. Some smaller groups broke off from the main protest and headed to the Sule Pagoda, a past rallying point for major anti-junta demonstrations.

The latest protests are the largest since the “Saffron Revolution” in 2007, when thousands of monks rose up against the regime and hundreds were killed.

Ms Suu Kyi’s government later became the first led by civilians in decades, though its power was limited by a military-drafted constitution.

Riot police have watched protests this past week, but soldiers have been absent and there are no reports of big clashes.