A NASA spacecraft touched down on the rugged surface of the Bennu asteroid on Tuesday, grabbing a sample of rocks dating back to the birth of the solar system to bring home.

It was a first for the United States – only Japan has previously secured asteroid samples.

The so-called “Touch-And-Go” manoeuvre was managed by Lockheed Martin Space in Denver, Colorado, where at 6.12pm (22:12 GMT) on Tuesday an announcer said: “Touchdown declared. Sampling is in progress,” and scientists erupted in celebration.

Seconds later, the Lockheed mission operator Estelle Church confirmed the spacecraft had eased away from the space rock after making contact, announcing: “Sample collection is complete and the back-away burn has executed.”

The historic mission was 12 years in the making and rested on a critical 16-second period where the minivan-sized OSIRIS-REx spacecraft extended its 11-foot (3.35-metre) robotic arm towards a flat patch of gravel near Bennu’s north pole and plucked the sample of rocks – NASA’s first handful of pristine asteroid rocks.

The probe will send back images of the sample collection on Wednesday and throughout the week so scientists can examine how much material was retrieved and determine whether the probe will need to make another collection attempt. 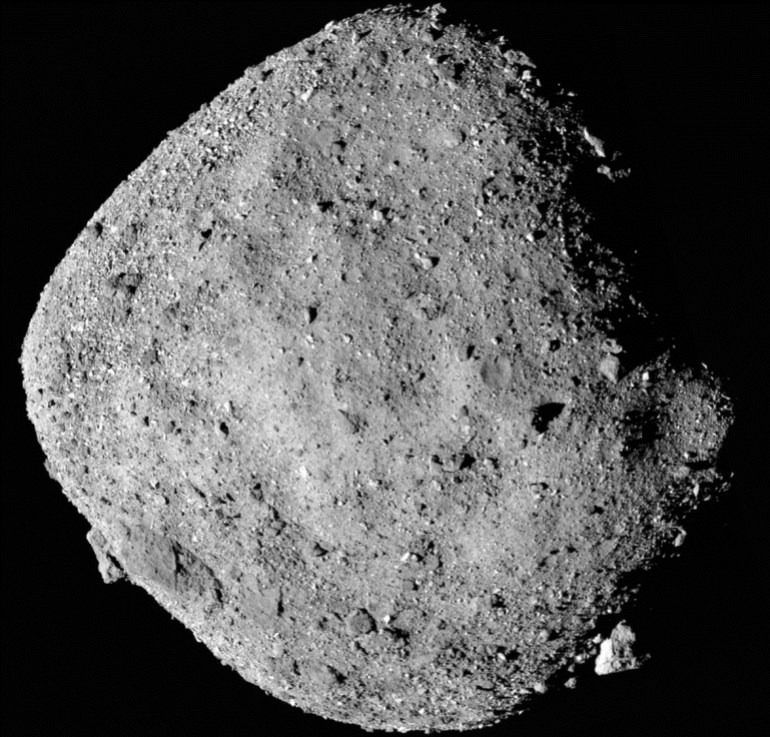 This mosaic image of asteroid Bennu was composed of 12 PolyCam images collected on December 2, 2018 by the OSIRIS-REx spacecraft from a range of 15 miles (24 km) [NASA/Goddard/University of Arizona/Handout via Reuters]Scientists want at least 2 ounces (60 grams) and, ideally, closer to 4 pounds (2 kilogrammes) of Bennu’s black, crumbly, carbon-rich material – thought to contain the building blocks of the solar system. The asteroid is located more than 200 million miles (321.9 million kms) from Earth.

NASA’s science mission chief, Thomas Zurbuchen, likened Bennu to the Rosetta Stone: “Something that’s out there and tells the history of our entire Earth, of the solar system, during the last billions of years.”

If a successful collection is confirmed, the spacecraft will begin its journey back towards Earth, arriving in 2023.

“Everything went just exactly perfect,” Dante Lauretta, OSIRIS-REx principal investigator from the University of Arizona, Tucson, said on a NASA live feed from Lockheed’s mission support building. “We have overcome the amazing challenges that this asteroid has thrown at us, and the spacecraft appears to have operated flawlessly.”

The robotic arm’s collection device, shaped like an oversized shower head, is designed to release pressurised gas to kick up debris.

The spacecraft launched in 2016 from Kennedy Space Center for the journey to Bennu. It has been in orbit around the asteroid for nearly two years preparing for the Touch and Go manoeuvre.

Bennu, which is more than 4.5 billion years old, was selected as a target because scientists believe it is a small fragment of what was once a much larger space rock that broke off during a collision between two asteroids early on in the history of the solar system.

“Asteroids are like time capsules floating in space that can provide a fossil record of the birth of our solar system,” Lori Glaze, NASA’s director of Planetary Science, told Al Jazeera. “They can provide valuable information about how planets, like our own, came to be.”

Thanks to data collected from orbit, the NASA team has determined two key discoveries: first, that between 5 and 10 percent of Bennu’s mass is water, and second, that its surface is littered with carbon-rich molecules. Atomic-level analysis of samples from Bennu could help scientists better understand what role asteroids played in bringing water to the Earth and seeding it with the prebiotic material that provided the building blocks for life.

Studying that material could also help scientists discover whether life exists elsewhere in the solar system, as well.

“If this kind of chemistry is happening in the early solar system, it probably happened in other solar systems as well,” Lauretta, OSIRIS-Rex’s principal investigator, told Al Jazeera in an interview ahead of Tuesday’s breakthrough. “It helps us assess the likelihood of the origin of life occurring throughout the galaxy and, ultimately, throughout the universe.”

Japan expects samples from its second asteroid mission – in the milligramMEs at most – to land in the Australian desert in December.