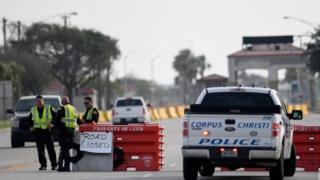 A shooting at a Texas naval base that wounded one sailor and left the suspected gunman dead was “terrorism related”, the FBI said on Thursday.

At about 06:15 local time, the suspect tried to drive through a gated entrance to Naval Air Station Corpus Christi before opening fire, striking a sailor.

But the sailor was able to raise a security barrier to block the vehicle, officials told the Associated Press.

There is a possible second suspect still at large, authorities said.

“We have a potential second related person of interest at large in the community, but we would encourage the public to remain calm,” FBI Supervisory Special Agent Leah Greeves said at a news conference on Thursday.

The injured sailor was treated in hospital for a minor injury and has been discharged, according to authorities.

Authorities have not yet named the suspect, who died at the scene, but he has been widely named in US media as Adam Alsahli.

The FBI has determined that Thursday’s shooting was terror related, Ms Greeves said, but did not elaborate on how authorities made this assessment or indicate a potential motive.

“We are working diligently with our state, local and federal partners on this investigation, which is fluid and evolving,” she said.

The FBI’s Houston field office has taken the lead on the investigation. Officials are still working to process the crime scene.

The Justice Department told the New York Times that “electronic media” had been found, meaning the suspect’s smart phone or other device could have been recovered amid the ongoing probe.

The base was on lockdown for about five hours after the incident, but was lifted shortly before noon local time.

The facility had a similar incident in December of last year. A man pleaded guilty to destruction of US government property and possession of a stolen firearm after driving his truck into a barricade at the station, according to the Associated Press.

And Thursday’s attack comes just days after the FBI announced that the member of the Royal Saudi Air Force who killed three sailors at a Florida naval station in December had worked with al-Qeaeda in the Arabian Peninsula (AQAP) in planning the attack.

According to the FBI, the gunman who was killed by authorities after shooting 11 people, had been radicalised before arriving in Florida for a three-year aviation course the US navy hosts for allied foreign servicemen.