Protecting areas of ocean from destructive human activity could help prevent climate change, protect biodiversity, and at the same time increase the catch of fish, according to the most comprehensive analysis of its kind.

The report by 26 leading experts maps out a way of securing a healthy future for the ocean, on which life on Earth depends.

Dr Enric Sala, the lead author and ocean scientist at the National Geographic Society, said: “Ocean life has been declining worldwide because of overfishing, habitat destruction and climate change.

“Yet only 7% of the ocean is currently under some kind of protection.” The researchers identified areas of the ocean where marine protection would result in the biggest gains, including some of the UK’s territorial waters.

Currently, just 2% of the world’s endangered marine species are protected by conservation zones.

But that could be increased to more than 80% if protected areas covered 21% of the most critical hotspots of the ocean, according to the study published in the journal Nature.

Coastal seas and the waters around underwater ridges and plateaus are the richest areas for marine life, and top the list for protection.

Climate change could also be abated by restrictions on fishing, the report suggests.

Trawlers drag heavy nets across 1.9 million square miles of the seabed each year to catch plaice and other flatfish, as well as shellfish such as scallops. 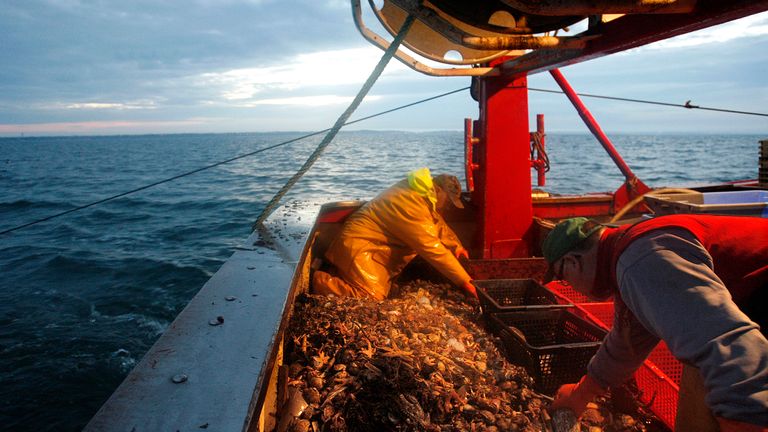 But they stir up the silt, releasing around a billion tonnes of carbon dioxide a year from dead plants and animals that were buried long ago.

That’s roughly the same as the emissions from flying.

The study shows banning “bottom trawling” from 4% of the ocean would stop 90% of the problem.

Dr Trisha Atwood of Utah State University, another of the researchers, said the impact of fishing on the climate crisis can’t be ignored.

“The ocean floor is the world’s largest carbon storehouse,” she said.

“If we are to succeed in stopping global warming, we must leave the carbon-rich seabed undisturbed.

“Yet every day we are trawling the seafloor, depleting its biodiversity and mobilising millennia-old carbon.”

Fishing communities have in the past resisted strict marine protection, but the study shows they too would benefit from conservation zones.

Stocks of commercial species of fish would sharply increase in just three years, spilling over into neighbouring unprotected areas.

In all, the annual catch of fish could increase by six million tonnes, the study suggests.

Dr Boris Worm, of Dalhousie University in Canada, and one of the researchers, said: “Smart ocean protection will help to provide cheap natural climate solutions, make seafood more abundant and safeguard imperilled marine species – all at the same time.

“The benefits are clear. If we want to solve the three most pressing challenges of our century – biodiversity loss, climate change and food shortages – we must protect our ocean.”