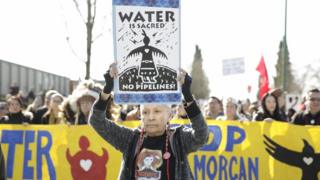 A top Canadian official has said this is a “great time” to build a pipeline because coronavirus-related restrictions ban large public protests.

She was referring to the Trans Mountain oil pipeline, opposed by indigenous groups and environmentalists.

It runs from Edmonton in Alberta to Burnaby, British Columbia.

Construction started in December and the project, an expansion of a 67-year-old pipeline, is expected to triple the current capacity from 300,000 barrels per day to 890,000 per day.

The pipeline has become a hot-button political issue for Canadian Prime Minister Justin Trudeau, who has said the project is in the national economic interest. It has faced numerous legal and regulatory hurdles.

“Now is a great time to be building a pipeline because you can’t have protests of more than 15 people,” Ms Savage said on a podcast of the Canadian Association of Oilwell Drilling Contractors, when asked about the project. “Let’s get it built.”

Both Alberta and British Columbia have a ban on outdoor gatherings of more than 50 people imposed to curb the spread of the coronavirus.

Ms Savage belongs to the United Conservative Party (UCP) of Alberta Premier Jason Kenney. Kavi Bal, a spokesman for Ms Savage, said in an email to Canadian media: “We respect the right to lawful protests.”

Irfan Sabir, from the opposition New Democratic Party, was quoted by CBC broadcaster as saying: “The UCP have already used the pandemic as an excuse to suspend environmental monitoring. When combined with the minister’s latest comments, this will harm the reputation of Alberta’s energy industry and inhibit our ability to attract investment and get our product to market.”

The Trans Mountain project faces fierce opposition from the government of British Columbia, environmental campaigners and some First Nations along the route. They are concerned about oil spills, climate change, and the threat to the killer whale population off the coast.

Supporters see it as a necessary boost for Canada’s struggling energy sector which will help fuel the economy for years to come.

A lack of pipeline capacity in the landlocked province of Alberta has forced the provincial government to curtail production to reduce a glut in storage.

Mr Trudeau’s federal Liberals took the rare step in 2018 of buying the pipeline for C$4.5bn ($3.4bn; £2.6bn) from energy infrastructure giant Kinder Morgan in a bid to ensure the project’s survival.