Russians are increasingly defiant against Vladimir Putin’s mobilisation order, as footage emerged today of violent clashes with police. Widespread demonstrations have broken out since President Putin announced plans to draft 300,000 men to fight in Ukraine. This afternoon, Russian police in Dagestan appeared to be overwhelmed by the scale of the protest, as many of those protesting stopped the mobilisation orders and blocked roads.

In one clip in Dagestan, a group of women chased after a police officer in an attempt to capture him, as he runs away.

Another showed protesters overpowering police who had tried to detain one demonstrator.

Videos posted by Nexta TV women from Dagestan “voicing their demands to local officials” to stop the Kremlin’s orders.

The overwhelmed law enforcement resorted to firing into the air in an attempt to maintain control, as President Putin appears to lose his grip. 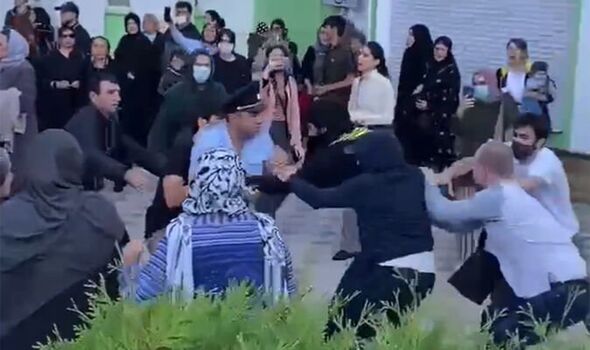 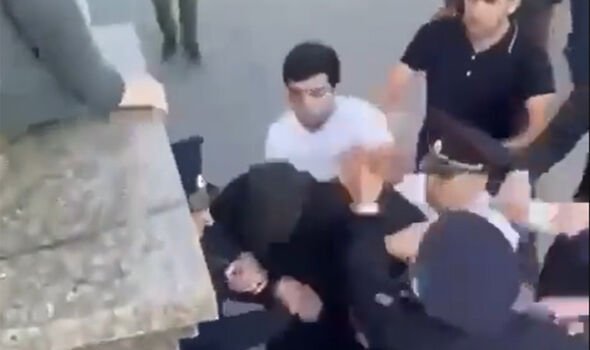 The mass unprecedented protests prompted one social media account monitoring the Ukraine conflict, @TpyxaNews, to claim the “situation is heating up”.

@Tendar said: “Protests in Dagestan are getting more violent. The Russian regime faces here the strongest pushback so far.

“We are just two steps away from something big.”

Wall Street Journal reporter Matthew Luxmoore tweeted: “Worrying scenes in Dagestan where parents of children mobilised for Russia’s war in Ukraine have blocked the main road to the regional capital.

“Police are firing in the air to restore order.” 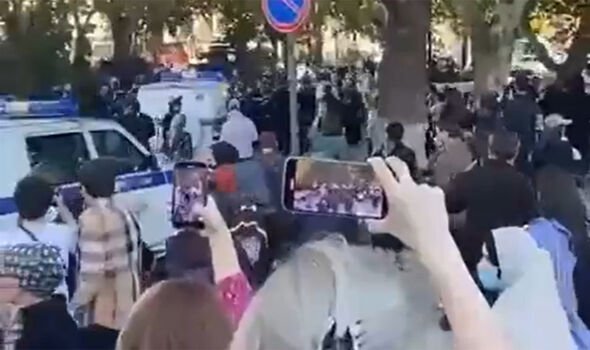 Ukraine: Russian jet shot down by US Stinger missile

“This morning locals gathered to protest against the mobilisation on the Khasavyurt-Makhachkala highway near the village of Endirei. Machine gun fire can be heard.”

Kyiv Independent reporter Alex Khrebet remarked that the protest footage showed “the final collapse of Russia will start in the northern Caucasus”.

Elsewhere, hundreds of mainly women protesters gathered in the eastern Siberian city of Yakutsk to protest the war and encircled police. 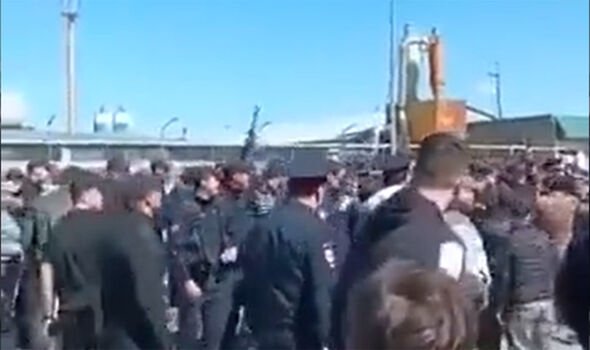 One clip which quickly spread online showed police in Moscow detaining an elderly woman who was simply waiting at a bus stop.

In a number that looks set to rise, independent monitoring group OVD-Info claimed more than 2,000 people have been detained during protests in Russia this week.

798 people were detained in 33 towns on Saturday alone.

Meanwhile, queues of Russians fleeing the country continue to grow.

The head of a checkpoint in the town of Altanbulag revealed that more than 3,000 Russians had entered Mongolia via the crossing since Wednesday.