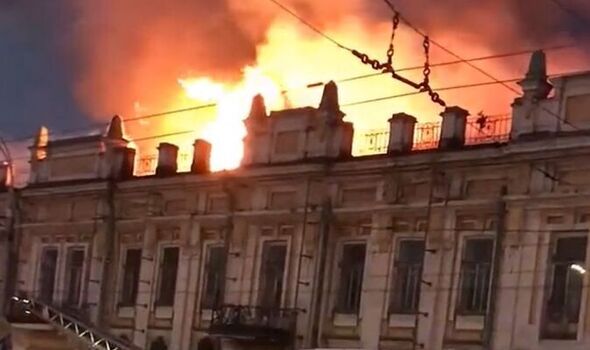 Footage on social media shows flames and smoke billowing over a building with reports a cultural heritage building in Irkutsk is ablaze. Twitter user @Richard12545678 tweeted video showing fire at a building, commenting: “Another fire in Russia, and this one may be suspicious. Authorities have so far not given a reason for this blaze at an empty, but cultural heritage building in Irkutsk. It’s next to a theatre in the city.”

Further video footage shows a ladder rising from a fire engine to the top of the building and fire crews climbing towards the flames.

NEXTA media tweeted at 2.40pm on Friday: “A historic building is on fire in the center of Irkutsk, Russia.”

A video clip shared by the Belarusian outlet shows a crowd of onlookers forming in front of the venue as thick, brown smoke pours from behind the building’s facade.

Unconfirmed reports of the blaze drew comment from Twitter users with one stating: “Friday 13 is not Russias lucky day …”